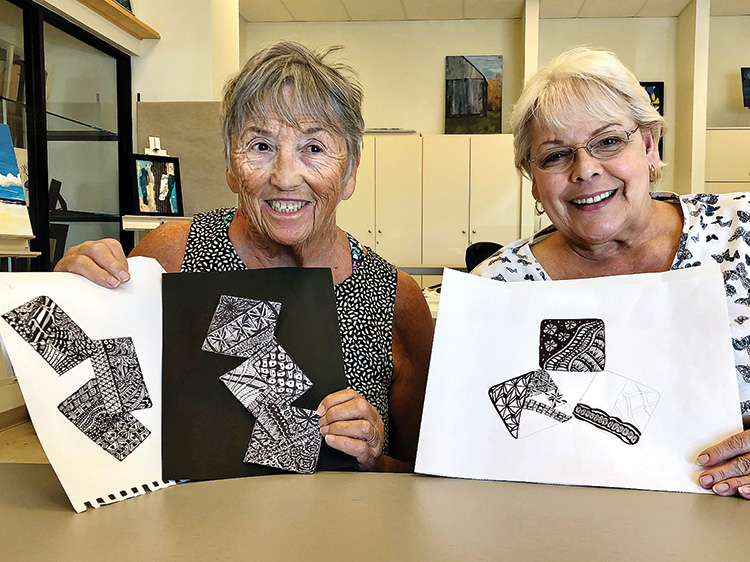 Just a couple who have tangled are Mary Beth Fisher and Georgia Brosnihan.

On Oct. 10, sixteen Robson Ranch residents learned how to tangle with Mari Cicola. Money collected from this meditative art experience was donated by Mari to the Heart of Eloy.

So, what is tangling? It is abstract drawing done with pen and ink that consists of sections of patterns, known as “tangles,” which are built with small repetitive strokes. It simply is a practice in repetition, pattern, and design, which many art teachers have been doing forever.Mari taught us the “tangles” named Flutterpie, Flez, Footlights, Keeko, Ixorus, Girdy, Borbz, and Widgets.

You may have heard of Zentangle®. Zentangle was created by Rick Roberts and Maria Thomas as a meditative way to utilize repetitive patterns. Maria Thomas sold botanical illustrations at art fairs. Many people commented on how beautiful her illustrations were, but how they would never be able to do anything like what she had done mainly because they were too busy, not talented, etc. One day when Maria was working in her studio, Rick interrupted her, which caused her to notice what she was experiencing just before the interruption. Maria described feelings of selflessness, timelessness, effortlessness, and a rich immersion in what she was doing—all classic aspects of a flow state. Rick, who had practiced meditation for many years, said, “You’re describing meditation.” They then created many tangles, which they patented and used as a form of meditation.

Why is Zentangling becoming so popular? “Almost every person discovers they can create something unexpected and beautiful in about 15 minutes, which feels good, particularly for people who believed they couldn’t draw. Another reason is that it enables you to deliberately access a state of relaxed focus, wake up your imagination and express it creatively with confidence.”

Artists in general can be so immersed in their art, no matter what medium—there is a feeling of timelessness and leaving your mind free of daily problems. Come visit and join the Fine Arts Guild and set your mind and imagination free.