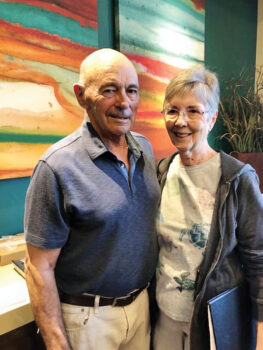 Meet Ken and Marsha Haines, one of three married couples who sing in the Robson Ranch Singers. They became full-time Robson residents when they bought a villa in 2018.

Ken and Marsha met and were married when they both worked for Braniff Airways in Dallas (Marsha is a former flight attendant). Twenty years later, when Braniff went bankrupt in 1982, they moved to the Seattle area where Marsha worked for a law firm and Ken became an administrative manager at the University of Washington.

Upon their retirement in 2002, they started singing in a local community chorus in Lacey, Washington. Neither of them had done any singing before. “It was a real challenge to learn to read music, and to sing what you’re reading. But we stuck with it until we became good enough at it to really enjoy it.” And Ken can definitely keep us in the correct rhythm—he’s constantly tapping out the beat. To Marsha’s credit, she is one of the few women in the all-male tenor section, and she can hold her own!

They also started snowbirding, spending many winters in Palm Creek, where they also enjoyed singing in their chorus.

In addition to singing, Marsha also enjoys preparing gourmet dishes for special occasions (she’s a wonderful cook). Ken can be found racing (and wrecking and repairing) his electric model race car as a member of the Robson Remote Control Club. They have been blessed with three children, four grandchildren, and six great-grandchildren.

Ken and Marsha are always the first to arrive at a party and the last to leave. Why? Because all they want to do is help the chorus in any way they can. You need to meet these special folks!