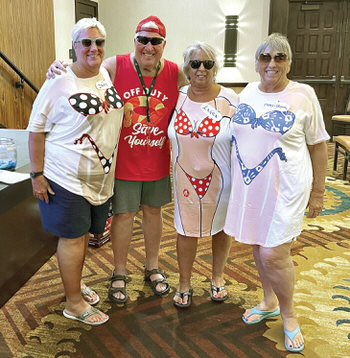 It was a packed house on the evening of Oct. 15, when 300 people were jammed into the Hermosa Ballroom to witness 10 teams competing in the MasterMind! Family Feud Tournament of Champions.

The pre-event entertainment included presentations about “We the People Honor Our Nation.”

Then, there was riveting action that went down to the wire as various teams made their way through the tournament bracket. It was impressive to see contestants in their costumes, getting a bit crazy, smiling, and simply having fun.

The audience was active while cheering for friends and neighbors and got into the whole experience as competitors wrestled with the questions that came their way. A considerable number of life-changing door prizes were awarded, including theatre tickets, a U.S. flag that was flown over our nation’s Capitol building, a Fleming’s Steakhouse gift card, and the like.