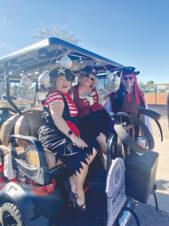 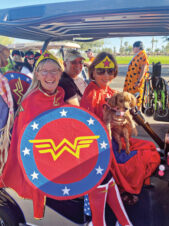 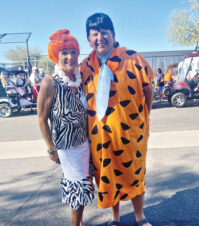 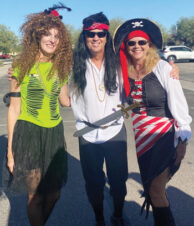 The Roving Ranchers held their annual Halloween Golf Cart Parade on Sunday, Oct. 31. A total of 85 decorated golf carts and a variety of costumed trick-or-treaters participated. There were pirates galore, witches, Wonder Women, cavemen, Star Trek’s Spock, peanut butter and jelly, Joe Biden and Nancy Pelosi, and Fred and Wilma Flintstone. The creativity of the decor was exceptional. Decor on the carts included a pirate ship, skeletons, spiders, cobwebs, and spooky music. The carts lined up three deep at the softball field and socialized until the parade kicked off at 4 p.m. The carts drove a specified route that was posted on Nextdoor and Facebook so residents could watch the parade. Costumed characters threw candy to the crowd and accepted a few treats as they drove by neighbors’ homes.

After the parade, the group returned to the softball field for socializing and dancing. Thanks to Joe Murauskis for organizing the event. Lastly, a big shout out to Jerry Duruz, drummer for the Road Runner Blues Band, who surprised the group with musical entertainment to everyone’s delight.