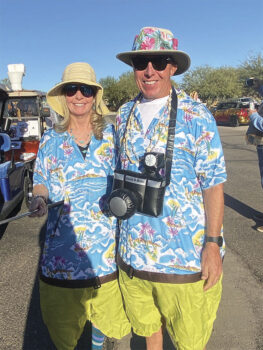 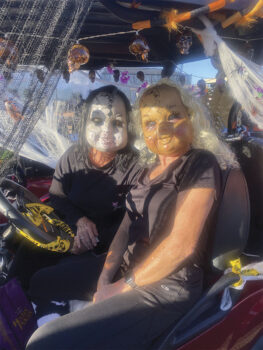 Before the start of the parade, Lisa Hunt collected donations for the Valley Humane Society shelter in Casa Grande. Accompanying her were two foster dogs, both of whom are up for adoption. Not only were two full carloads of donations collected, but monetary donations were also given.

About 70 golf carts drove through the community streets. Comanche was the best place to see the parade and residents lined the street in anticipation. Several partiers came forward with trays of yummy treats for the costumed participants as they drove by.

Once darkness fell, the carts lit up the night in shades of orange, black, and purple. The creativity of the residents with costumes and golf carts was amazing. At the parade finale, residents returned to the softball parking lot where Jerry Duruz entertained everyone with music through the decades.

The Roving Ranchers next event is Dec. 13 with a tour of Davis Monthan Air Force Base. Don’t miss the Christmas Golf Cart Parade on Dec. 16! To keep updated on the Roving Ranchers schedule, join the site on nextdoor.com or facebook.com.