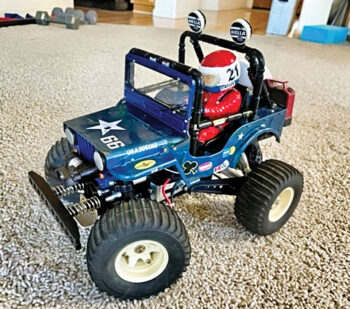 The vintage “Wild Willy” Jeep now runs great, thanks to a labor of love to bring it back to life. 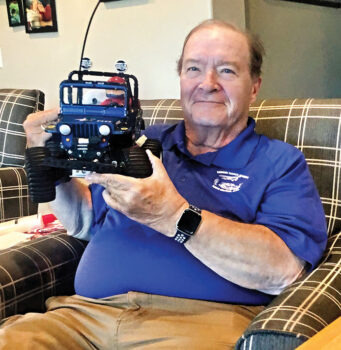 John Messenger, an active member of the Robson Ranch Radio Control (RC) Club, Inc., has an interesting personal tale regarding his fondness of RC vehicles.

About 40 years ago John’s wife gave him a 1/10th scale M38 military-patterned Jeep called the “Wild Willy.” The actual M38 vehicle was produced for the military beginning in 1950 and was patterned after the civilian-oriented Jeep CJ 3.

John’s oldest son, JD, was about 10 years old at the time. Over several nights and weekends, he and his dad together assembled the Wild Willy. “We had fun building it and then running it,” John remembers. “And doing ‘wheelies’ was the Jeep’s real claim to fame.

“We moved a number of times in the following years, and Willy always came along. It spent a lot of time in our garages, collecting dust. But recently, I decided to bring the M38 back to life.”

John enlisted the help of Chris Kreig at Hobby Action in Chandler, who was also himself a Wild Willy enthusiast. Given the passage of time, John’s Jeep was in relatively good condition, though it did have some issues.

As John described, “The original, odd-looking battery was no longer manufactured. A LiPo battery would fry the electronics without a full conversion, so that was out of the question. Chris came up with an ingenious solution. He fashioned a battery case shaped like the old battery from his 3-D printer and inserted a small nickel battery inside.

“After 40 years of life, my tires were full of cracks and useless. Following much searching, Chris was able to locate a manufacturer in Hong Kong that had a mold for the original Wild Willy tires. After some concern about an international order, we obtained a full set and they arrived without delay.

“The most expensive parts were the wheelie bars that were found from an online seller. We grabbed those immediately before they were gone. A few other parts like the driver’s right arm, a windshield, a wince, and a grille were located through various sources. Fortunately, at some time in the past I had purchased a vintage transmitter, receiver, and matching servos.”

John added that Chris Kreig only charged him for parts and that his efforts were a labor of love. “How generous of Chris and how great is the crew at Hobby Action. Now my Wild Willy has come back to life and is running great!”