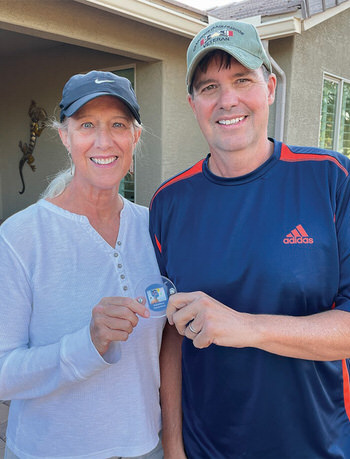 The Blumes, winners of the MasterMind! Medallion Treasure Hunt

Residents from all over Robson Ranch participated in the MasterMind! Medallion Treasure Hunt. They searched high and low for a three-inch disc that was hidden somewhere in the community. Daily clues were published on the Nextdoor website.

It was fun for everyone to participate in the treasure hunt, use their detective skills, get some exercise, and gauge how their competitors were doing. The competition was intense; there were determined searchers out there.

The medallion was found after the seventh clue. Pam and Chris Blume located the disc underneath one of the dugout benches at the softball field. Pam was unsure about the location at first, but said that she took a second look under the bench and found the elusive object.

Pam and Chris won $100 cash, a $50 gift card from the Hideout Steakhouse and BBQ restaurant, and two premium tickets for The Phoenix Theatre Group’s upcoming performance of Singin’ in the Rain.

Congratulations to the Blumes!