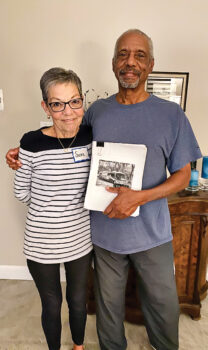 On Monday, November 4, the book club Reading Between the Wines met to discuss the manuscript for a book, Fugitive Witness, by Bob Rice. Right from the beginning, a hit man murders three men on an elevator; however, one of the men is an innocent bystander. Not only that, but there was a fourth person, his wife, who witnesses this murder but manages to escape.  With the mob after her, neighbors questioning her involvement in her husband’s death, and a random stranger traveling with her, her life has drastically changed. This gripping story holds your interest as many other characters get involved with and without their knowledge of actual events. Just when you think you’ve “got it,” something else happens!

Bob Rice, the author, recently moved to Robson Ranch; and while at a party, he met Suzi Hetrick, who is a Robson resident and an avid reader.  Suzi has read many of Bob’s short stories and then had the pleasure of reading his manuscript. Since she liked it so much, she asked him if the book club could read it and then have him join the discussion on his very own book! Luckily, Bob agreed.

It was quite a unique experience being able to talk with the author on how he came up with the plot, how the characters were developed, and ask questions regarding the story’s circumstances. Bob also asked the members questions to see if his writing conveyed his ideas well enough. Everyone thoroughly enjoyed this month’s book club discussion!

Only one question remains: Will Bob try to get the book published?