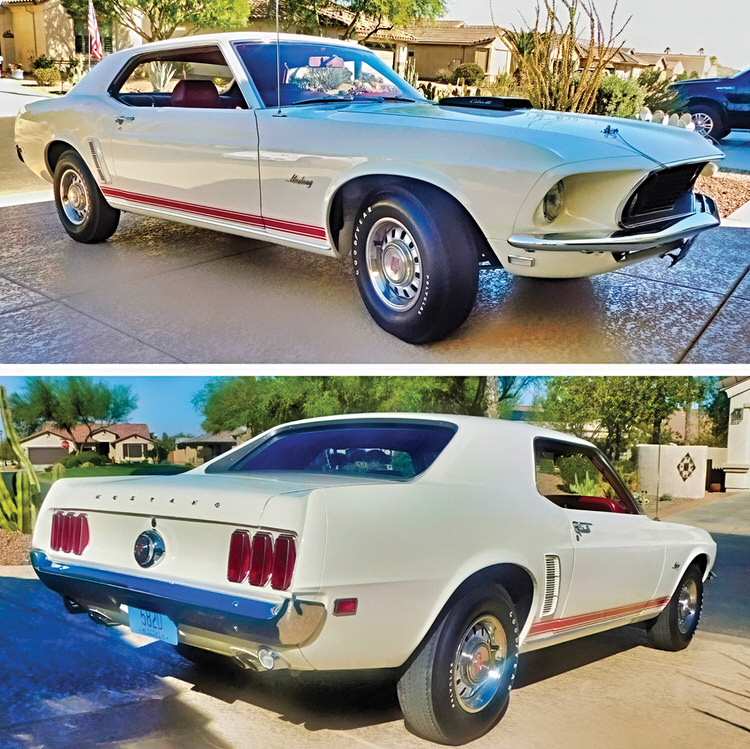 At first glance, Robson Ranch residents Henry and Jean Isaksen’s 1969 Mustang GT coupe will invite you to say, “That’s a very nice restoration,” which it definitely is. But Henry will be quick to point out that this particular pony car will stand out in a crowd of faithfully restored Mustangs. Consider:

* Of these hardtops, only 48 were factory equipped with Ford’s 428CJ (Cobra Jet) Ram Air engine rated at 335 horsepower coupled to a four-speed manual transmission.

* Five cars were painted Wimbledon White, and just one of those had a dark red décor interior. The one featured here is that car.

An owner of other collectible autos, Wisconsin-based Henry discovered his “barn-find” Mustang in 1989, partially disassembled and missing its engine and traction-lok differential. Intrigued, Henry went back to the barn with a knowledgeable Ford mechanic. “Based on his input, I arranged to buy the car,” Henry says. “That was the start of the hardtop’s longtime residency in one of my garage stalls.”

In further research, Henry learned that the car had originally been sold to Ford Division Product Engineering on Sept. 20, 1968, to be delivered to the I.R. Building Garage in Dearborn, Mich., for evaluation and test purposes by Ford.

Ordered with $922.72 in optional equipment, the out-the-door total cost for this Mustang was $3,091.78. It was delivered with four gallons of gas, which required an additional $1.33.

Once Ford’s development department was done with these vehicles, they were eligible to be sold to employees or Ford dealers. Amazingly, through more investigation, Henry discovered a man who had purchased the Mustang from a Lincoln-Mercury dealership in Green Bay, Wis., in March 1970 when it had 6,800 miles on the odometer.

Given the Mustang’s unique heritage, Henry knew it deserved a proper restoration to return the car to its original condition as it left the factory. Twenty-seven years after first purchasing it, in 2016 Henry turned the Mustang over to Jim Cowles from Shelby Parts and Restoration to begin the process.

Unfortunately, in 2020 with the reassembly well underway, Henry received a phone call. “Jim wanted me to know that he had been diagnosed with a cancerous brain tumor. As a result, he had sent my car to Troy Kuyoth for completion. Jim died in January 2021.”

After 33 years of tedious research and restoration, Henry and Jean took delivery of their impeccable Mustang in June 2022. “That was the first time I ever sat in the car,” Henry says with a smile.

The car was recently shipped to the Isaksen’s home here in Robson Ranch. Now, when you hear the rumble of a throaty exhaust coming from a white 1969 Mustang hardtop cruising around the neighborhood, you’ll know the backstory.