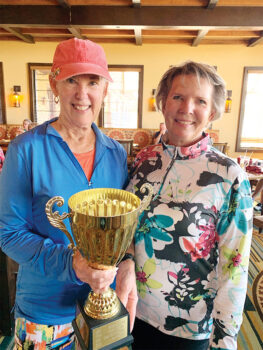 Sally Fullington shot a net 69 to win the Robson Ranch Ladies Golf Association’s Developer’s Cup trophy. The net play tournament has been an annual event since 2009. Sally was not the only player who had terrific rounds—a three-way tie had to be broken by Golf Genius, the software used by the league. Also shooting a net 69 were Fran Fowler and Connie Drew. Great playing, ladies!