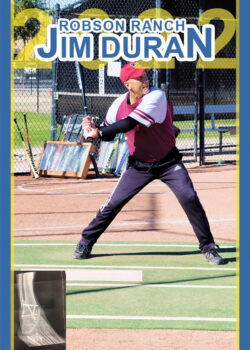 Being raised in a family that included four sisters, Jim Duran had to endure the unenviable treatment of nail polish, makeup, and being dressed like a girl. Fortunately, Jim grew up “all boy” and enjoyed stellar athletic success that now includes senior softball at Robson Ranch.

Jim’s ability to throw and catch was first displayed playing dodgeball in a Denver, Colo., elementary school. It was from here he was recruited to be the starting shortstop and pitcher on an 11-year-old baseball team. “My coach was Mr. Nelson, who looked just like a bulldog. He also coached a competitive football team that I played on, too.” This early success would be on display again in Jim’s high school years. “I was the shortstop and pitcher and excelled at both positions. I made the all-state team after having several no-hit games.” With his success came opportunity. “I was offered a couple of scholarships, but decided not to accept them. I married my first wife at age 18 and had three children.”

Playing high school football resulted in an injury that was to have implications later in life for Jim. “It was the first play of the first game, and I was returning the kickoff when an opposing player dragged me down by the collar. As we went down, his knee went into my tibia/fibula and caused a compound fracture. I remember the cheerleaders screaming, the coaches bringing in the ambulance, and my mother holding my hand on the way to the hospital.” An unfortunate repercussion of this horrific injury occurred later in life when Jim learned that the leg had never been set correctly. “Ten years later, a surgeon had to go in and fuse my ankle with four screws, which made it very difficult to do much with running sports.” Unfortunately, he was not done with the surgeon yet. “After playing softball at Robson for the better part of eight years, I increased the hardware count in my ankle to six screws, but that won’t stop me from playing out my softball career.” When you throw in surviving stage-four colon cancer, you get the feeling that Jim is indestructible.

“Eight years ago, I approached my wife Donna about moving to Arizona. When my company said they could transfer me, and we decided she could retire, we were on our way.” After looking at several communities, they decided on Robson Ranch. “The people were so nice and they had softball. I dug my old glove out of the box after 25 years of storage. I now play softball with a bunch of friends who all act like we’re in our 20s again.”

The Robson softball club feels fortunate to have Jim as a member. He’s an excellent defender and hitter who makes every team he plays on better. Jim may not “burn up” the base paths, but he is extremely competitive and a wonderful teammate. Jim inspires many of us with his grit and determination, and we wish Jim many more years of playing the sport he loves.