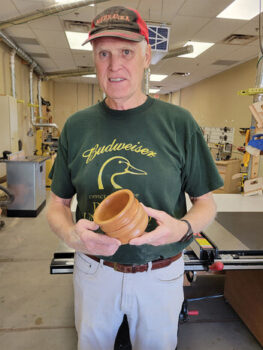 The woodshop was very busy during the month of October. We had quite a few people working on different projects. We held a basic lathe, handle, and bowl turning class attended by Rex Gittens and Keith Bradley. Rex created a very nice bowl for his first time out. A couple of very talented fixtures in the woodshop, Bill Steursel and Jim Price, turned some one-of-a-kind bowls. Bill crafted his bowl from a variety of wood that came together in his beautifully finished bowl. Jim collected some excess threads and immersed them in resin, and once it hardened he turned a uniquely distinctive piece of art.

A “Westie” cribbage board was created by Mike Consentino in the shape of a dog’s paw pad with a variety of images of the West Highland terrier in each pad. The board was created to be donated to the Northern New England Westie Rescue, Inc., based in Rye, N.H. The organization rescues and sets up adoptions for West Highland white terriers, cairn terriers, and Scottish terriers in New England. Many people ask, “What is the difference between rescuing and adopting?” There are a number of organizations that provide adoption for Westies, whose owners have surrendered them. Normally these dogs are family pets, so they usually are housebroken, generally with few issues. It may be that the owner is moving to a place that doesn’t accept dogs, or they’ve had a new baby and aren’t comfortable with the dog around the baby. This is an adoption situation. Rescue dogs, on the other hand, may come from horrific situations where they’ve lived in wire cages their whole lives, being bred over and over again until they’re about 3 to 5 years old, when they’re given up or killed. The board will be used for their annual fundraising auction usually held in February.