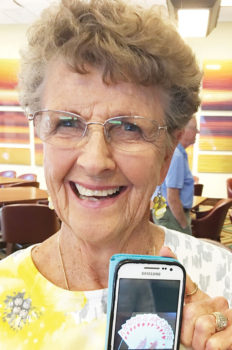 On March 28 Terry Price bid and made a grand slam during regular Wednesday social bridge play. The photo shows the hand she was dealt before she played it. Most bridge players have never experienced such a hand. The probability of a team having enough points to bid and make a grand slam is .02%. The chances of a single player being able to bid a slam without the aid of their partner is much rarer than that. Congratulations to Terry!