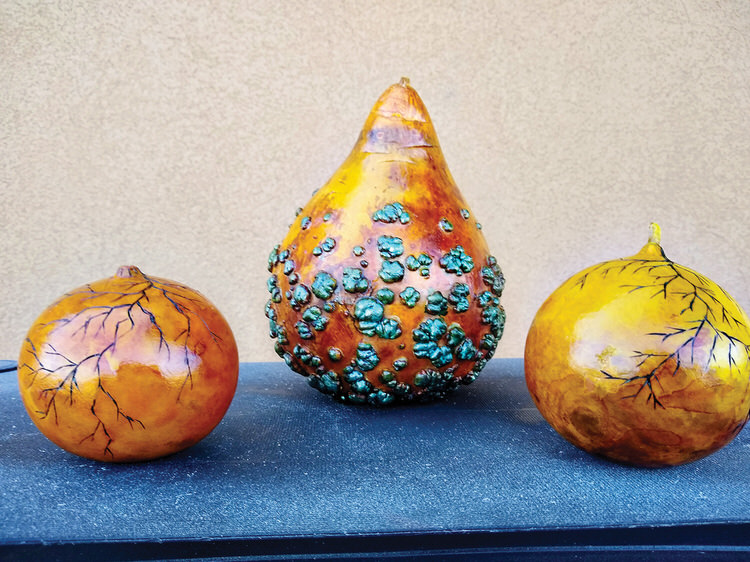 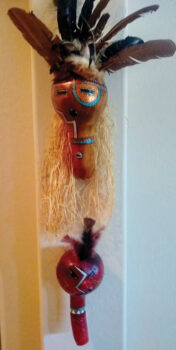 Janet Bloam and her husband Jim moved to Robson Ranch in 2010 from Medina, Ohio, a small town of quaint Victorian homes. In Medina, she was fortunate to design her dream home. Janet was no stranger to design.

She received a scholarship to the Columbus College of Art & Design where she studied human form, perspective, and of course, color and design. She was not a fan of art history and she knew she was not going to be the next Leonardo da Vinci, so she put her studies on the back burner. With her art background, she was able to go into the field of interior design and decorating, her real first love.

Janet joined the pottery club soon after moving to Robson Ranch. She loved the feeling of the silky clay and molding and creating her pottery pieces. Due to an illness, she reluctantly had to give it up after eight years. It wasn’t until Janet lost her husband last year that she ventured out to meet new residents and join some new clubs, gourds being one of them. Immediately after Janet’s orientation class she knew she was hooked. In September 2021, she officially became a gourd member. But she wasn’t like other first-time members. Janet began working on the biggest gourds she could get her hands around. We watched her paint, stain, burn, and Dremel some really strange-looking gourds. What in the world was she doing? Finally, her vision came to fruition. She had built a totem. A beautiful totem. We were so impressed and inspired that a group of gourd members, including Janet, created and donated a totem to the Denim & Diamonds fundraiser. Her mask embellished with feathers and striking paint makes you feel that at any moment they will be dancing around a bursting flame. Janet just finished working on an American Indian lady with an angelic face, carved hair, and painted Indian blanket wrapping her. You can view her in our display studio showcase.

Our studio is open Mondays and Thursdays, 9 a.m. to 1 p.m., Sundays, 9 a.m. to 2 p.m., and Tuesday afternoons, 1 to 4 p.m. We welcome you to stop by and see what we’re doing or just admire our display showcase. Many of our items are for sale, so if you’re looking for a unique gift, think gourds located at studio 3 in the Fine Arts building.

If you’re interested in an orientation class, stop by the studio to sign up. Orientation is $10 for the two-day class, and this includes your first gourd. Membership is $20/year.