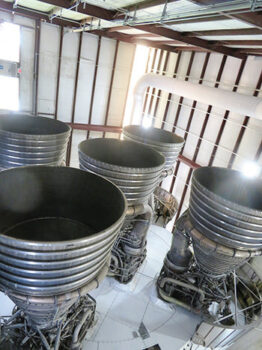 Saturn V rockets in quincunx formation. I took the picture last September while touring the NASA Space Center in Houston, Texas. Note the quincunx pattern at the bottom of the rocket.

While reading The Labours of Hercules by Alice A. Bailey in my book-reading group, I ran across the familiar word “quincunx” and had to reach back in my memory to recall where I had been exposed to this word before.

Quincunx noun quin·cunx | ˈkwin-ˌkəŋ(k)s 1. an arrangement of five objects with four at the corners of a square or rectangle and the fifth at its center, used for the five on dice or playing cards and in planting trees. 2. an aspect of 150°, equivalent to five zodiacal signs. 3. in botany, an overlapping arrangement of five petals or leaves, in which two are interior, two are exterior and one is partly interior and partly exterior.

Origin and Etymology: 1640s, originally astrological, of planetary alignments at a distance of five signs from one another, from Latin, literally “five twelfths” (especially “five unciae,” that is, “five-twelfths of a libra, the basic unit of Roman currency), from quinque “five.” Also applied, especially in garden design, to arrangements in two sets of oblique rows at right angles to one another (1660s).

Quincunx used in a sentence:

Traditionally, the trine and sextile are benefic aspects, while the square, opposition and quincunx are considered malefic.

In each section, seeds were sown in a quincunx pattern.

Quincunx in the news:

At the same time, Saturn continues its tense square to Uranus while making a quincunx to the full moon.—Gala Mukomolova, refinery29.com, March 2, 2021.

Once my math background kicked in, I recalled where I had seen this word before. The Quincunx is a bead board. It was developed by a mathematician named Galton in 1873. The device works by dropping a series of acrylic balls, or beads, through rows of precisely located pins. Each bead, as it hits a pin, has a 50-50 chance of falling to the left or right. Each bead then continues to fall over subsequent rows of pins and eventually lands in a slot or cell. The shape of the accumulated beads in the cells forms a pattern, or what is statistically referred to as a bell-shaped or normal distribution. A large number of data populations form a normal distribution, which is frequently used in statistics.

Another application of the quincunx is in rocket science. This pattern may be recognizable to us as it shows up on dice and playing cards also.

Submit any quincunx experiences or any word you may like to share, along with your insights and comments, to [email protected]