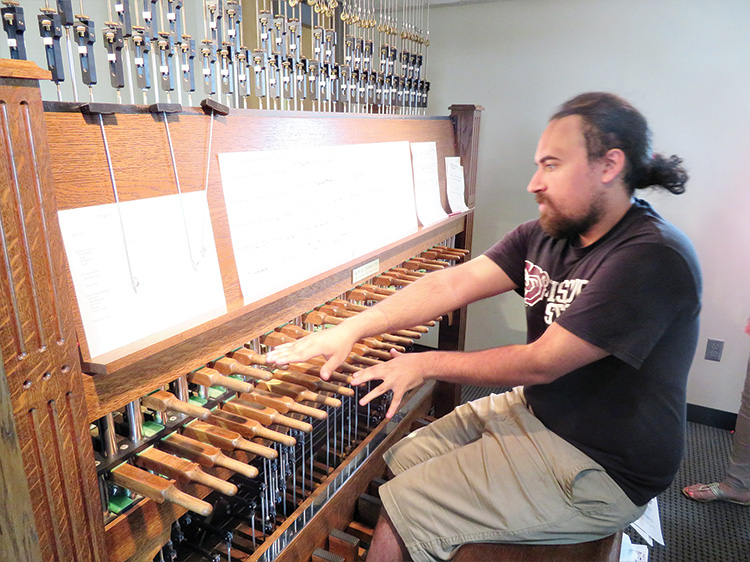 While traveling this summer on the Goldwing, I was fortunate to receive a private tour of Missouri State University’s Jane A. Meyer Carillon. Carillons are the world’s largest instruments, and this one is the largest of all those located in the U.S. Midwest. This carillon is made up of 48 bronze bells and sits in the top of a 2.5-million-pound, 140-foot structure. The Jane A. Meyer Carillon’s bronze bells, cast-iron clappers and keyboard were purchased from and installed by Royal Eijsbouts, a prestigious bell foundry in the Netherlands. The total weight of the 48 bells is 32,000 pounds, with the largest bell weighing 5,894 pounds, or nearly three tons. The carillon has a range of four octaves. According to the Guild of Carillonneurs in North America, the Jane A. Meyer Carillon is one of approximately 180 carillons in North America. The largest carillon in the world is located in Portugal, in the Mafra Convent-Palace with 120 bells.

Carillons are typically housed in a bell tower or belfry of a church or municipal building. Carillons are played serially to produce a melody or are sounded together to play a chord. A traditional manual carillon is played by striking a keyboard – the stick-like keys of which are called batons – with the fists, and by pressing the keys of a pedal keyboard with the feet. The keys mechanically activate levers and wires that connect to metal clappers that strike the inside of the bells, allowing the performer on the bells, or carillonneur/carillonist, to vary the intensity of the note according to the force applied to the key. Carillon music is typically written on two staves. Notes written in the bass clef are generally played by the feet. Notes written in the treble clef are played with the hands.

Carillon used in a sentence in the news:

As is tradition, before the parade, from 10:15-10:45 a.m., a carillon concert rings out from the bell tower of St. Christopher’s by the River Episcopal Church, 7601 Old Mills Road.— cleveland.com, “A parade, fireworks and music: Fourth of July activities planned in Sun Messenger communities,” June 25, 2019.

It’s not being billed as such, but with visits this summer from about a dozen players, performances at these two venues amount to a carillon festival.— Peter Dobrin, https://www.inquirer.com, “Classical summer: Bradley Cooper, Harry Potter, piano stars, Yannick debuts at a spiffed-up Mann Center,” June 5, 2019.

I hope you hear a carillon sometime! Please submit your experiences, any thoughts on this month’s column, or any word you may like to share, along with your insights and comments, to [email protected]