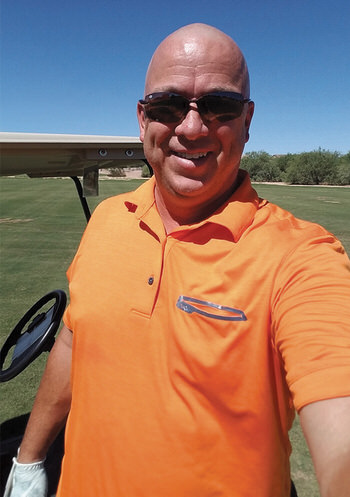 In my opinion, putting is the easiest part of the game. It has the least number of moving parts, but I’m constantly told by people when they talk about their games that “I can’t putt” or “I’m a horrible putter.” Well, if you’re thinking that way, will you ever be good at putting? Probably not… Most of putting is mental, and you need to believe that you’re a good putter and have a positive outlook on putting. Let’s start with some basics. When setting up, keep your feet and shoulders parallel to the target line and your eyes directly over the ball. The ball should be just slightly in front of center to ensure an ever-so-slightly upward motion at impact. Make sure that the putter face remains square to the intended line of the shot. The putting stroke should be a pendulum-like stroke in which your arms and shoulders move in unison, creating a smooth, repeatable action. Probably the biggest fact in poor putting is using the wrist to swing the putter. When making a putting stroke there should not be wrist action.

When gripping the club, you want to hold the club with just enough pressure to control it throughout the swing, including the moment of impact, but not so tight as to create tension in your arms/hands.

One of my favorite putting drills is the string line drill. To do the string line drill, go to Home Depot and buy two nails approximately 3 to 6 inches in length and 10 to 15 feet of string. Tie the string to the top of the nails. Find a spot on the practice putting green that has a straight putt with no break. Put one nail in the ground behind the hole, then stretch out the string and place the other nail in the ground. Then start placing golf balls under the string starting about a foot from the hole. Then place another ball about 4 inches behind the first and continue placing balls with increasing distance between the balls. With 10 feet of string, you can probably get 10 or 12 balls under the string line. The benefits of this drill are two-fold. First, by having the other balls behind the one you’re hitting, it limits your backswing and makes you follow through. Most poor putters take a big backswing and then try to slow the putter when approaching impact. This diminishes the quality of contact and consistency of the shot. The second benefit of this drill is with the string above your putter it helps you see if you’re not keeping your putter on the target line during the stroke.

The second drill I’d like to tell you about is a distance drill to help you get the ball closer to the hole. I constantly see players on the practice putting green hit five to 10 putts to the same hole from the same distance—while the first putt challenges you to hit the ball the proper distance, the remaining putts are just repeating the stroke. So when working on my distance control, I take three golf balls, pick three different distance holes, and hit one to each. Before striking the putt, get lined up and ready to go, then take a 1-1/2- to 2-second look at the hole. By doing this it allows your brain to calculate the distance better. And with those tips, you will become a better putter.

That’s your putting lesson for this month. Next month, I’ll go into the short game shots like pitching and chipping.