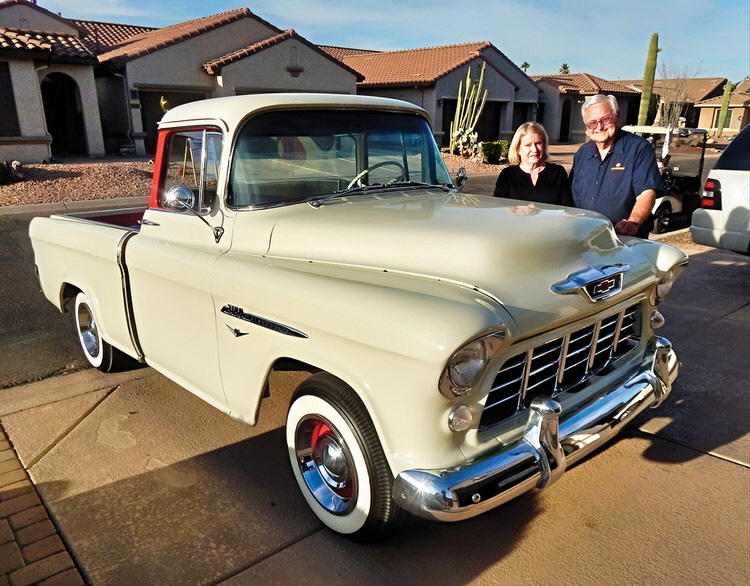 Sharon and Richard Horton with their 1955 Chevrolet Cameo pickup.

I’ve always maintained that every vintage car or truck has at least one amazing story to tell—if they could only talk.

Such is the case when Robson Ranch residents Sharon and Richard Horton share the amazing history of their 1955 Chevrolet Cameo pickup. Richard has known the truck since it was brand-new, and it has never been registered outside of Eloy!

From the cab rearward, it featured custom bumpers, a smooth-sided bed, and taillights that resembled those on a 1954 Chevrolet passenger car. The bed panels were constructed of fiberglass by the same company that built the Corvette bodies for General Motors.

The interior featured full carpeting, two-tone dash, and a radio—items not normally seen on a standard pickup in those days. The base engine was a 235 cubic-inch straight six coupled to a column-mounted three-speed manual transmission, but buyers could opt for Chevy’s new 265 cubic-inch V8 with an automatic transmission.

Inspired by the early Corvettes, the ’55 Cameo was only available in one color scheme—Bombay Ivory with the B-pillar and inner bed painted commercial red. In later years, other colors became available.

The Horton’s Cameo was purchased new by Adolph ‘Bud’ Harpin, who owned the Texaco gas station in Eloy. The dealership was Sizer Chevrolet in Coolidge. It had the optional 265 V8 and a three-speed manual transmission with overdrive.

Richard, whose father farmed several thousand acres northwest of Eloy, went to work for Harpin when he was 15 years old. Sharon and Richard graduated from Santa Cruz Union High School in Eloy in 1963.

After logging several hundred-thousand miles on the truck, Bud Harpin passed away in 1971. A year or so later, the Hortons purchased it from Harpin’s widow for $3,000. It eventually went into storage until 1995, when a complete frame-off restoration began. One year later, at its first public showing in Pinetop, the Cameo earned first-place honors, with more awards following.

Harkin also owned a tire-retreading and auto parts store in Eloy. Today, that is the location of Hancock’s Garage. Ironically, that is where the restoration took place.

Richard drives the truck only lightly, recording just 1,056 miles since its restoration. Despite receiving many offers by others who’d like to purchase it, this Cameo will always be a part of the Horton family. After all, their next project to undertake is a second Cameo—a 1958 model.