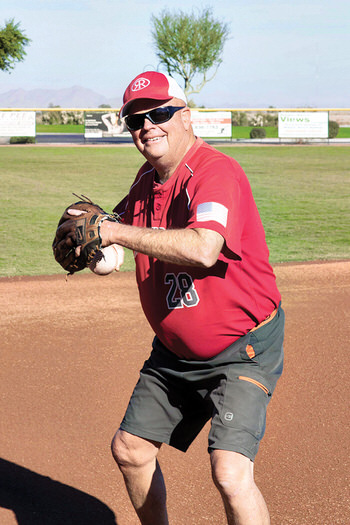 Growing up in Marion, Iowa, Barry Christensen became accustomed to being an underdog. Usually the youngest and often the smallest kid in his baseball-oriented neighborhood, Barry was delighted to be included in the games and thrilled just to get on base. Muddy fields and a creek that marked the home run distance made lasting memories for the youngster. “We had a standing game at 2 p.m. six days a week at the Catholic school in our neighborhood,” Barry reflects. “Games were very competitive, but informal, as gloves and other equipment were routinely shared, and catchers had no protective gear.” Little League baseball games were played in the evenings and were well-attended by adults, including Barry’s parents. “I became an infielder but ended up pitching most games, with a knack for throwing strikes.” Barry also recalled battling darkness when evening games would extend into extra innings.

As a high school baseball player, Barry again was a bit of an underdog. His years in Marion were interrupted, and when he returned in his junior year, he had to play for Marion’s biggest rival, Linn-Mar. “All my childhood friends and teammates were at Marion, and I was playing for Linn-Mar.” His senior year was highlighted by his selection to the all-conference and all-metro teams. Barry also mentioned facing an all-state pitcher in his senior year who twice had his no-hitter spoiled by Barry.

Being an underdog took on another aspect when Barry started cheering for the Pittsburgh Pirates and his favorite player Roberto Clemente. “Everybody was a Yankees fan because their games were broadcast to the widest area, but I fell in love with the Pirates in 1960 when they beat the Yankees in the World Series.” Little did Barry know that later in life when he started visiting the home of his future wife, Sandy, that he would once again be the underdog. “Sandy could name the entire starting lineup for the Chicago Cubs and that led to many spirited debates with her dad and brother about who was better, the Cubs or the Pirates.”

“Following marriage in 1973, I became an avid fast-pitch softball player, playing shortstop or third base for the next 10 years,” Barry recalls. “After moving to Robson Ranch in 2016, I began keeping score and witnessed how supportive and fun everyone in the program seemed to be. With the encouragement of Paul Lewinski, I decided to get involved and never looked back. For those of you who are fans out there at the Ranch, the question is, why not me?”

No longer the underdog, Barry has become an important part of softball at Robson Ranch. His steady play in the field and dangerous bat make him a valuable member of any team on which he plays. We are grateful to have Barry in our club and welcome his positive attitude and his quiet, competitive spirit.