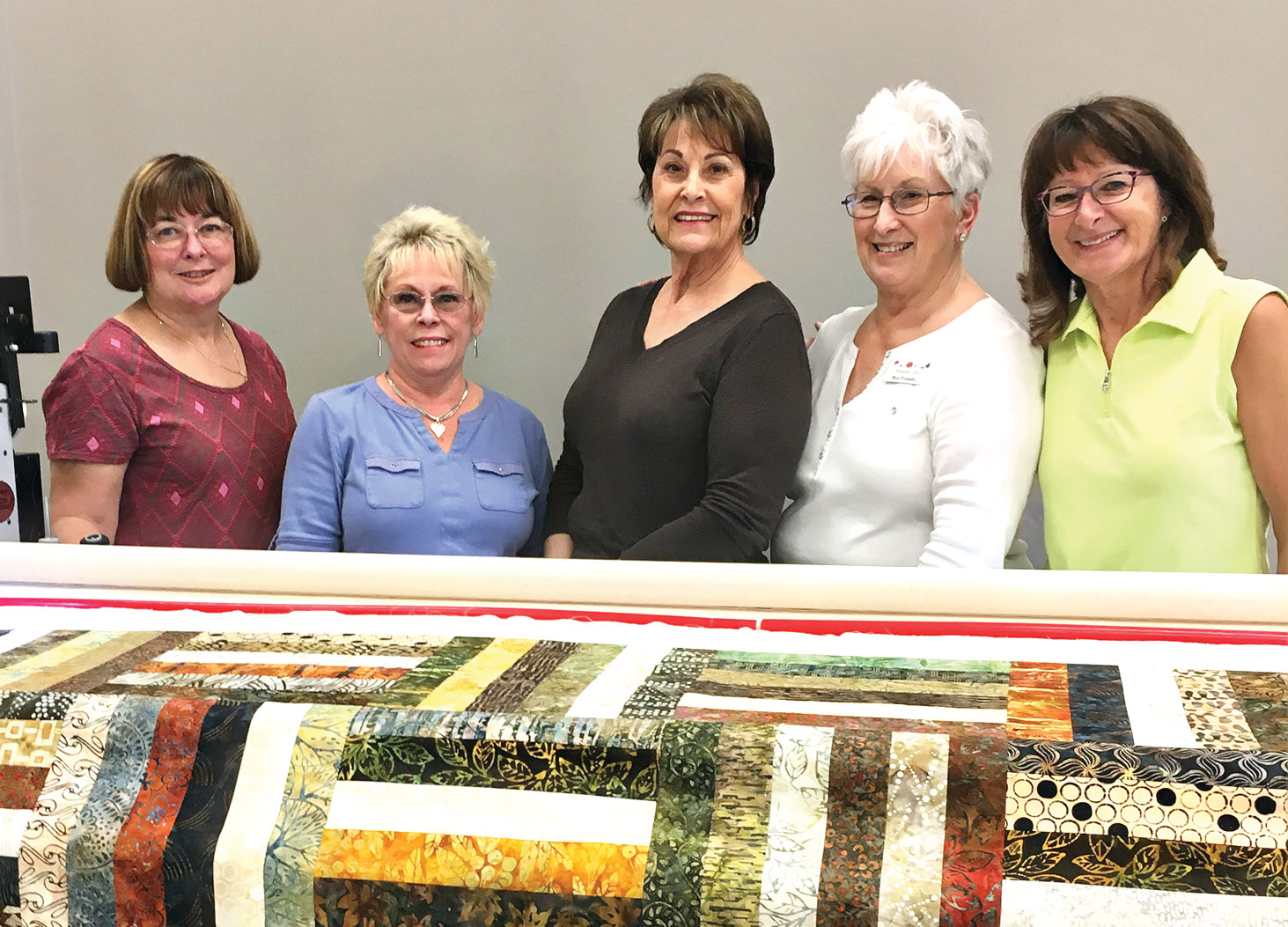 What is a long arm? These are machines which sew through all three layers of the quilt by moving the machine, not the quilt. And that is it!

The Material Girls has a long arm committee that is dedicated to learning new techniques and teaching classes so that we can all experience the joy of this quilting process. This committee also looks after maintenance and can be called upon to help when something goes wrong. The machine can be pretty intimidating at first and so the long arm team are our “first responders” when we get into trouble. The Material Girls are lucky to have such a dedicated group. The members of the longarm committee are Jean Handlen, Brenda Hanson, Jane Kihlstrom, Melody Peebles, Sherrill Simmons, Mary Syer and Bea Pressler.

Mr. Robson gave The Material Girls our Gammill in 2012 and it is used to complete our many charity quilt projects. An average lap sized quilt takes less than an hour of actual quilting time on the machine

;, however, loading the three layers and securing them on the machine, threading the machine and winding bobbins all take additional time so we figure 3-4 hours to complete a quilt on the long arm.

Last year, as well as this coming year, we are supporting the Family Advocacy Center for Children and providing the Eloy Police Department with two quilts for each police car for when they must remove a child from a home. The Material Girls support the local cancer center for patients having chemo. The Material Girls has also supported the Eloy Senior Center for four years by annually providing a quilt or pillowcase to all of the residents. We also make comfort quilts for our own residents who have a serious illness or who have lost a spouse.

1. The advent of the sewing machine led to an idea known as a “quilting machine,” which made its debut in 1871.

2. The first quilting frame and machine consisted only of two bars that allowed the user to move the quilt and the frame beneath the machine to quilt straight, parallel lines on the fabric. By roughly 1877, the design had been modified, and began to look similar to the design quilters now know as a long arm quilting machine.

3. Before electricity, the operator used a hand crank to move the machine along the rails and over the fabric.

4. Almost 30 years later, the designs and patents for quilting machines had changed drastically.

5. While the Depression Era caused a decrease in the interest in sewing machines and an increase in hand sewing, the quilting machine still managed to take on new and exciting designs. During the past 20 years the long arm sewing machine has become a popular and familiar concept to quilters.

6. In 1980 the invention was created which moved the machine on tracks while the top, batting and backing were on rollers. This moment would change quilting dramatically.

7. The man who thought this method up was Ken Gammill and a whole line of machines, are named after him. The first one had an 18-inch throat.

8. The speed and ease with which a quilter can have a quilt top finished by a long arm quilter has caused an increase in recent years for quilting. These machines allow quilters to have their quilts finished without going through the time-consuming process associated with normal machine quilting or hand quilting. Sewers (or sewists, piecers, or quilters) can now take their finished quilt tops to professional long arm quilting businesses and pay a fee to have their quilting done by a long arm quilter. The availability of relatively quick and reasonably affordable quilting services has helped to cause a surge in the quilting business and an overall growth in interest in quilting as an art form.