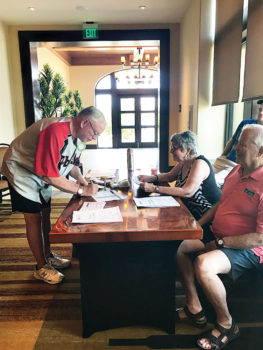 Signing in for the Robson Ranch Blood Drive

Blood dripped in the Hermosa Ballroom at the Ranch House on Wednesday, June 28, yet no one was running away from there. Rather they kept coming, willingly, to offer their own lifeblood in an effort to save someone else.

The Red Cross blood drive was surprisingly successful for summertime. Several people suggested this was not a good time to hold a drive due to so many of our winter visitors having left and others on vacation to cooler climes. So the announcement on Next Door Neighbor went out to groups nearby as well as to Robson Ranch and the turnout was approximately half Robson residents and half neighbors from surrounding communities.

The date was chosen because summertime is notorious for shortages in the blood supply, and the Fourth of July weekend inevitably sees an increase in demand due to accidents. It was gratifying to know that we surpassed the goal of 17 pints of blood by five, collecting 23 by the end of the day. That’s the same amount we collected at the last Red Cross blood drive held here in March 2016 when our population is at its height.

Once the notices went out I learned that some people are under the erroneous impression that donations through the Red Cross are not guaranteed to be used locally. Local needs have priority, but when there is surplus the blood is sent on to other locations.

An interesting fact to note is that each pint of blood can potentially help three different people because it can be divided into red blood cells, plasma and platelets.

So a huge thank you to each of you who so generously and selflessly gave of your time to potentially save the lives  of others.