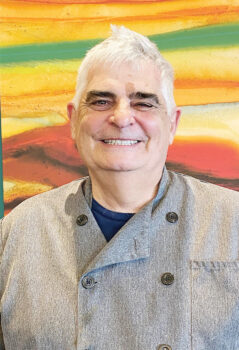 Stephen McVeigh joined the Robson Ranch team as a lead cook in March 2020, and has been a great addition to the team. So much so that we have expanded his role to oversee the culinary department of the Grill. Stephen has a vast background that encompasses working at four- and five-star hotels in the United Kingdom, Australia, and New Zealand to spending a season on a crab boat in Alaska to owning his own restaurant. Most recently, he worked at the Wrigley Mansion in Phoenix. When asked what he likes about Robson Ranch he said, “There are no boundaries to what I can do here and we receive a lot of feedback on where to go.”

“I love that our wine dinners, special events, and comfort food offerings are so well attended and we’ll continue to focus and build on them,” Stephen said.

Stephen has already done a great job changing the culture in our kitchen with positive attitudes, team building, and teaching the culinary arts. Please join us in congratulating and supporting Stephen in his new role at the Robson Ranch Grill.