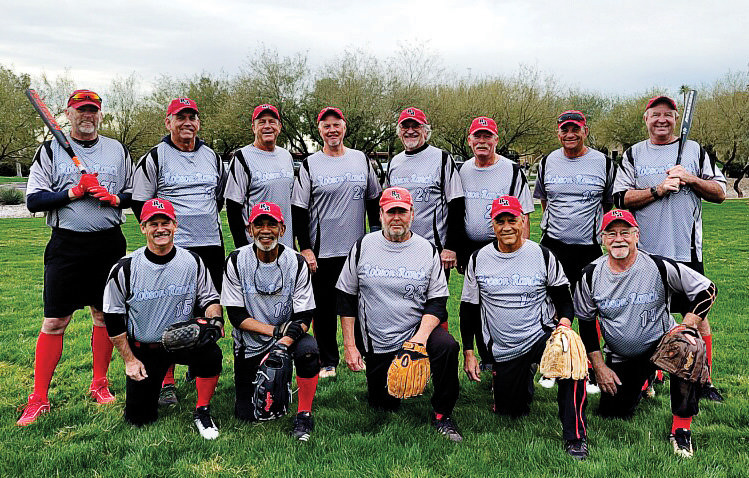 The Robson Ranch softball club hosted their first tournament of the season featuring five teams from various active adult communities. From nearby locations, the Palm Creek Vipers were joined by the Mission Royale Titans. Also competing were the Sun City Rock-kickers who came all the way from Surprise to join the battle. The tournament also included two teams from Robson Ranch. The Robson teams were the Sandstorm, coached by Pat Kohls, and the Raptors, coached by Clark Fletcher. The tournament was conducted over a two-day period starting on Friday, Jan. 7 and concluding on Saturday, Jan. 8.

It should be noted here that the Robson Raptors were a late entry into the tournament because one team that had previously agreed to play decided not to come. Coach Clark Fletcher volunteered to try and find enough RR ballplayers to make a team and complete the list of teams required. This is important because a five-team tournament guarantees each team gets two games per day, playing each team once in the tournament. Robson softball is grateful to those Raptors who volunteered to compete.

The competition on the field was extremely close, as exhibited by a three-way tie for second place. When two teams have the same win/loss record, the tiebreaker is the results of the head-to-head matchup between the two teams. When three teams are involved, and each team had a win against one of the three tying teams, it is declared a tie. Thus, this tournament had three second-place teams.

With a record of three wins and one loss, the Robson Raptors were the tournament champions. Playing several close games, they just seemed to find a way to win, displaying great character, poise, and determination. Led by shortstop Jim Duran and rover Larry Ginn, the team produced big plays on defense at crucial times as well as timely hitting when the game was on the line.

With games starting at 9 a.m. and continuing until the last game at 2 p.m., fans were entertained for several hours. They were treated to the voice of veteran announcer Artie Wachter working the microphone from the scorer’s booth. Without the help of volunteers, an event like this would not be possible. The softball club would like to recognize Steve Falek for his contribution as well as Keith Bradley, Ray Messervier, Merlin Tiefenthaler, Corky Rodine, and Mark Mindrum. Thank you for everything you do.