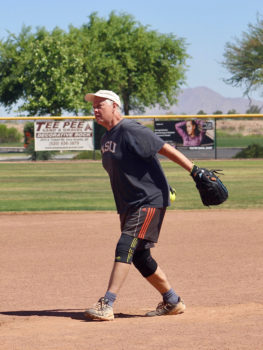 The summer sun sets late in the evening in the small town of Graceville, Minn. As a young ballplayer, these last hours of daylight would often find Steve Andrews still practicing with his junior American Legion baseball team, honing skills he still uses today playing softball at Robson Ranch.

Located near the joining borders of North and South Dakota, Graceville is a small town where cow pastures are often substituted for practice fields, and playing wiffle ball in the backyard with his older brother formed lasting memories for Steve. Memories that include his favorite team, the Minnesota Vikings, and their famous defensive line known as the “Purple People Eaters.”

Playing little league was an important part of his early years in Graceville. One incident that stands out in Steve’s mind occurred when he was pitching and accidentally beaned an opposing hitter in the helmet. Fearing the wrath of his coach and even imagining being expelled from the league, Steve soon had his concerns assuaged when his coach praised him for plunking the opposing team’s best hitter. When asked how participation in youth sports influenced the adult you, Steve responded, “Playing sports taught me to always strive to be better, even when I wasn’t as talented as others.”

Like many boys in small towns, participation in multiple high school sports was almost mandatory. Playing football at Graceville High, Steve was the quarterback for the offense and doubled as a linebacker on defense. In the basketball program he was listed as a 5’ 10” center but still provided a much-needed contribution to the basketball team. His baseball coach was an important part of his high school athletic career, and happened to be the uncle of Joe Mauer, who was a major league all-star infielder for the Minnesota Twins.

Softball became part of Steve’s life at an early age—joining a slow-pitch team made of young, single men like himself that enjoyed many weekend tournaments. Tournaments that were an equal combination of comradery, competition, and adult beverages.

Participation in senior softball began for Steve here at Robson Ranch in 2014. His first impression was how welcoming all the players were, and “how great it is to be part of a team and to imagine you are a kid again.” He had not played in 25 years and was glad to have so many experienced players to help him get started. Steve was soon intricately involved in both league and tournament play, playing for the Desert Bats travel team with members from both Robson Ranch and Sun Lakes, and the Robson tournament team, where he quickly made himself an important asset. Steve has continually provided exceptional play on the field and is an important club member, working in several different areas including field maintenance and serving on the board of directors.

Steve wants to thank all his teammates for their wonderful support and encouragement. “Too many to name,” he says, but the loyalty and enthusiasm of the Robson Senior Softball club membership is an important part of the softball experience at Robson Ranch. His most important support has come from his wife, Kay, who is a loyal fan that loves to travel to tournaments, and enjoys the company of other wives. Tournament outings to many spots in Arizona, Nevada, and Utah continue to provide fond memories that Steve and Kay will treasure for years to come.