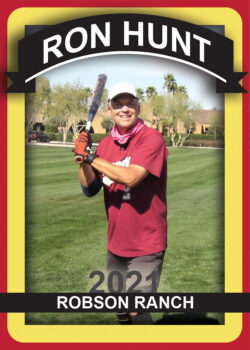 Few people are aware that the Tilt-a-Whirl carnival ride was invented in Faribault, Minn. Even fewer people were able to enjoy sitting in the deteriorated ride seats outside the boarded-up plant with Ron Hunt and his little league team-mates after practice. With his dad coaching, Ron endured the oversized, all wool uniforms and played against players up to three years older than himself. It was all worth it for the one magical season when despite finishing the regular season in last place, this group of too young, too small, and not-very-good players, rose to the level of the coaching they had received all year and defeated the top three teams in the postseason tournament.

“As a junior I led the team in hitting and as a senior I was second worse. I was in love. I heard it was bad for you and it turned out to be true,” he said. “Sports gave me a perspective on the ups and downs, success and losses in life. Coping with adversity is likely easier due to sports.”

“Basketball was my favorite sport. But luck was not with me when I went to college. There was a second team, All Wisconsin point guard who was a half-step quicker and could dunk.”

Being the last player cut from the team was not all bad as Ron improved his grade point average and enjoyed a greater social life. Ron also achieved a good bit of notoriety in basketball at age 13. Competing in the National Free Throw Shooting contest, Ron qualified for the state finals by making 28 out of 30 free throws at districts. Next was the state championship. Held at Williams arena, home of the University of Minnesota, he won with a 21 out of 25 performance in front of a packed house. Nationals were in Omaha at the home of the Omaha Kings. Shooting at half-time he ended up tied for fourth out of ten competitors.

Ron began playing slow-pitch softball after high school and had the memorable opportunity to play with his brothers.

“At one point four of my five brothers were on one team,” he said.

Thirty-two years later Ron once again found himself on the softball diamond. This time it was at Robson Ranch.

“It’s fun to see how certain sports can bring us together,” he said. “Just like baseball or softball all those years before, it is a great place to develop friendship.”

Responding to a question about his support system Ron mentioned every player, volunteer, and fan are all great supporters.

“For me, the volunteers are especially important, they give so much behind the scenes to make the player and fan experience a greater one,” he said.

Ron is a past president of the RR Softball Club and continues to be an important part of who we are. He is a highly skilled player on both the B tournament team and league team. We hope that he continues to enjoy good health and good softball.