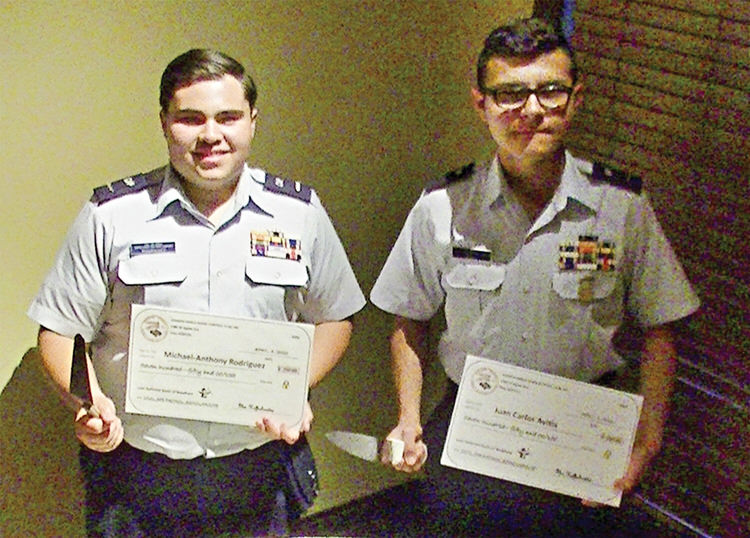 The highlight of the event was the inaugural presentation of scholarship awards to two deserving members of the Eloy School District’s Civil Air Patrol (CAP) program. The Robson Ranch RC Club was instrumental in forming an aviation education program with the District. Flying members of the club worked with the district to implement a training program that included academics, flight simulators, and RC plane flying. The program was hugely successful and developed into a local squadron of the U.S. Air Force’s Civil Air Patrol.

In 2021, the RC Club approved the development of a scholarship program for members of the CAP squadron. Monies are raised through free-will offerings from club members, auctions, raffles, and public donations. The two recipients of these $750 scholarships were Juan Carlos Avitia and Michael-Anthony Rodriguez.

Juan served as a volunteer presenter at the Central Arizona Valley Institute of Technology—Aviation and Drone Technology class. Through the Civil Air Patrol, Juan has completed Ground School in preparation for his pilot’s license. This summer Juan is enrolled in a calculus for engineers class at Arizona State University.

“Being in the Civil Air Patrol has improved aspects of my personal life, which led to improvements in my academic and physical abilities,” said Juan. “Being active in the CAP has improved my leadership skills such as networking, public speaking, and multi-tasking.”

Squadron Commander Rattey, in his letter of recommendation, stated that C/Capt. Avitia has always looked for challenges. As such, he had worked his way up to a Cadet Captain and is now the Cadet Squadron Commander. He has taken the lead on many projects and has followed them through to a successful conclusion.

Michael is a member of his school’s chapter of the National Honor Society, maintaining a 4.0 GPA. He is on the tennis and track teams and is a reader for his church.

Michael said, “My goals are a bit undecided, but not without direction. I would like to explore the engineering aspect of aerospace. Another interest is psychology. I am studying anatomy and physiology and the basics of health care at Central Arizona Valley Institute of Technology.”

Michael also finds a career as an educator to be of interest. His ultimate goal is to obtain a well-paying career where he can invest money, then eventually come back to his hometown of Eloy and serve his community.

Commander Rattey, in his letter of recommendation, said that Michael has shown himself to be a leader and has risen to every challenge given to him. In a short period of two years, he has worked his way up to a Cadet Captain and is now Deputy Cadet Squadron Commander. He has continued to improve himself and has been a mentor to newer cadets.