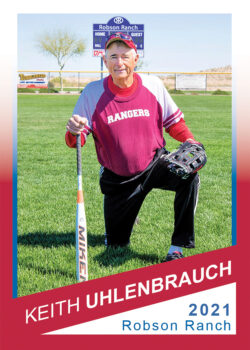 Born in Appleton, Wis., Keith Uhlenbrauch lost his father at an early age, but there was no lack of discipline, as his mother enrolled him in a Catholic grade school. “The nuns had us toe the line,” says Keith. “I can remember getting hit by the ruler more than once.” Keith first started playing baseball in Appleton recreational leagues, which involved riding bikes to the other side of town. “It was nothing to bike five miles to play,” recalls Keith.

In his eighth-grade year, his family moved to a small farming community called Hilbert. “It was a cultural change for me coming to the smaller community. We had three grades in one room and a certain time the nun would come to teach us. I think my life changed for the better being in a small town of 750 people. You knew everyone and the friendly atmosphere is a building experience.” Football was first played in Hilbert during Keith’s freshman year. “I played one year but just didn’t have the size those farm boys did,” says Keith. Baseball and basketball were a better fit for young Keith, but he quit after two years to earn money and help with family expenses.

Softball became an important activity for Keith after graduating from college and returning from military service. “I played on our company team and enjoyed many weekend tournaments. There was, however, a price to pay for these tournaments as after playing multiple games it would take a week for your arm to heal from throwing.” Softball at Robson Ranch started for Keith in 2012. “I called Paul Lewinski from Wisconsin and told him he could evaluate me and I would not be hurt if he told me he didn’t think I was good enough. Nine years later Paul has still not responded.” Another amusing story involving Paul was when Keith failed to catch an easy fly ball at first base. When coach Lewinski asked him what happened Keith said, “Give me a break I have a hangover.” Next thing he knew, he was on the bench.

Serving on the softball board provided Keith with some of his “most gratifying” times. One year as vice president and three years as president saw Keith leading several important projects. The first was getting the banner sales program going, which meant filling the outfield fence with advertising that finances most of the activities for the club. Next was the outfield scoreboard. Tom Harris had started the scoreboard process while he was president, and Keith and the rest of the board got it completed. The scoring booth was another major accomplishment that took almost two years to complete. These projects, plus many other less obvious contributions, are a strong argument for Keith to be called our M.V.P. (Most Valuable President).

“I would never change a thing in the time I have been in the softball program. The players and workers that make our program a success is a compliment to them. I am proud to be part of the program.”