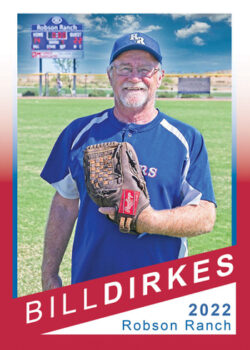 Bill Dirkes claims the distinction of being “the oldest kid to ever play tee-ball. We didn’t have any baseball in Federal Way, Washington, so when we moved to Claremont, California, I had no skills and had to start at the lowest level.” This start led to his father going to the store to purchase ball gloves for both himself and his son. “He used S&H Green Stamps to buy the gloves,” Bill recalls. Neighborhood Wiffle ball games soon became a part of Bill’s world. “We kept hitting statistics for figuring batting averages, and hitting it off the neighbor’s house was a home-run.”

The San Diego Padres were a Pacific Coast League team in those days, but Bill listened to games on the radio with his grandmother, who was an ardent life-time fan. Bill remembers, “Before they had Jack Murphy stadium, the home runs would rattle off a tin roof. It’s a sound I will never forget.” Watching the 1967 All-Star game on television also made a lasting impression on the youngster.

Bill used his early interest and moderate success to play youth baseball though all the different levels of organized baseball. “I played every summer, starting with little league and moving up to Pony league and Colt league.” High school baseball was not in Bill’s destiny, but he remembers turning out for freshman football at a weight of 98 pounds. “There was a group of us that got the leftover equipment that we had to take, whether it fit or not. The coach pointed us to the bench at the first practice and told us that was the only part of the field we would ever see.”

After playing adult softball in San Diego, Calif., Bill got the chance to coach his daughter, Sara, after she came home with the sad story of being the last one picked for a game at school. Bill immediately started schooling her in the fundamentals of the game, and she soon gushed with pride of hitting a home run and becoming the first pick for the game. Later, after entering high school in Philipsburg, Mont., Sara was playing volleyball, and Bill observed that there was no assistant coach. He volunteered and was quickly put to work. In his second year of being a volunteer assistant, he was informed that the head coach was resigning and that he would be the head coach the following season. The result was a 17-year head coaching stint, several division titles, and two trips to the state tournament.

Softball and Robson Ranch was a perfect fit for Bill in 2017, when he and his wife, Jerilyn, found their “place in the sun.” “We watched a softball game on our first visit and knew right away we would make a home here,” says Bill. After we bought, I contacted Artie Wachter and was soon on the field having fun.”

Bill has made himself and important part of our softball club. Having served a year as vice-president, he has now ascended to president. We are delighted to have him on our team both on the field and off. Thank you Bill, for all you do.