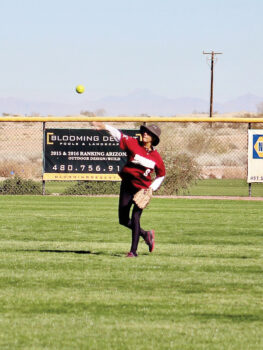 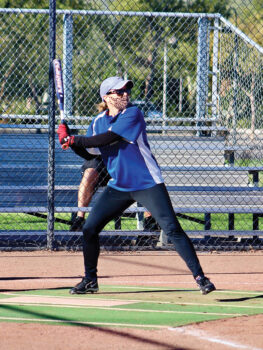 The Robson Ranch (RR) Softball Club has experienced a membership surge the last nine months. Among the new members are several females who have made their presence known in dramatic fashion and these ladies are impacting the way softball is being played. While there is a history of female softball players at RR, it is minimal and has always seemed to fail to gain a firm foothold. All that has now changed as a substantial number of women have made their way to the field, and appear to be here to stay.

Until the fall of 2020, most female softball players at Robson Ranch could be found at the Saturday Community Softball program, which was the product of Artie and Dixie Wachter. This program functioned as an opportunity for residents who wanted to experience softball in a fun, noncompetitive atmosphere with an emphasis on the fundamentals of fielding and hitting. Encouraging both men and women to develop their skills, Artie and Dixie sent many players on to the more competitive Palm Creek league as members of Robson Ranch teams. The great majority of those players moving on to competitive softball were men, but recently, there has been a change.

With the increased number of residents who have joined our softball club, Ron Carpenter instituted a Saturday League in the fall of 2020. Several members who have played for years in the Palm Creek league now found an additional softball opportunity on Saturdays. What we did not know is that our teams were going to be enhanced with several ladies who were ready, willing, and able to play. Unfortunately, the use of the field on Saturdays for ball games brought an end to the community softball program, but Artie and Dixie can be proud of the number of these players who are now competing with the guys. The Saturday league that began in the fall and continued for both the winter and spring seasons is now considered a co-ed league and they are having a rewarding athletic experience.

When asked about her softball experience at Robson Ranch, Lori Aitken said, “I hadn’t played softball in about 25 years and was new to playing second base. The guys gave me lots of tips and were very encouraging. What could have been intimidating was instead fun!”

Debra Kwait gushed, “There’s nothing better than being up to bat and hearing all of the men yell out ‘small ball,’ alerting the fielders to move in, and then being able to hit an in-the-park home run over the left fielder’s head.”

All of the ladies who are now participating are the pioneers for those who follow and can take pride in leading Robson Softball into a new era.