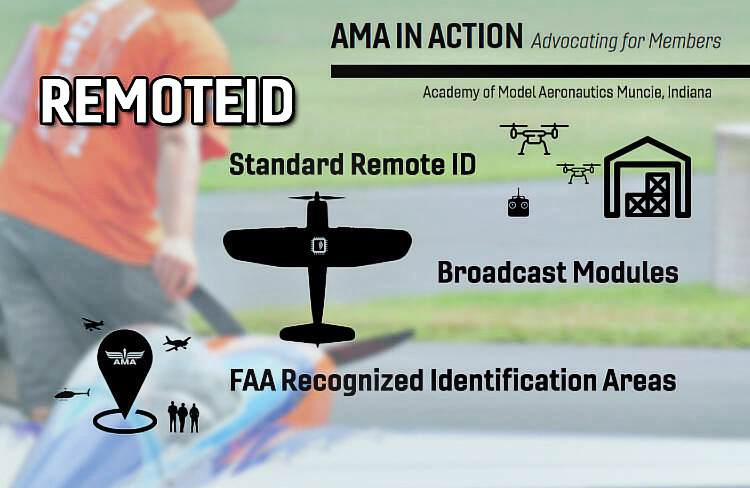 The Federal Aviation Administration (FAA) passed two new regulations that will impact people who fly model aircraft at the Robson Ranch Radio and everywhere across the nation. The FAA is now requiring model pilots to pass a knowledge test in order to fly their aircraft. Expected to begin after June 2021, the test will be available online through the Academy of Model Aeronautics (AMA) website for their members. A certificate of passage will be issued upon successful completion of the requirement, and individuals will be required to be shown to law enforcement personnel upon request.

More importantly, starting in September 2023, all aircraft flown must meet one of three requirements. The aircraft must contain an electronic device similar to a large airplane transponder, which will identify the aircraft and its location to the federal agency. New model aircraft manufactured and sold after implantation of the regulation may contain this device automatically. When purchased, they must be registered with the FAA. For aircraft without this device included, a broadcast module can be purchased and registered with the FAA and be placed in any model aircraft used after the rule goes into effect. These devices are expected to cost under $50 each and must be registered with the FAA. Lastly, under the new law, any aircraft flown in a location designated as an FAA Recognized Identification Area (FRIA) will be exempt from the above requirements. AMA locations such as the Casa Grande RC Flyers airfield expects to be designated a FRIA as they are an AMA field and more than five miles from any airport. The AMA will help their chartered clubs obtain the FRIA designation.

The FAA is expected to monitor compliance and has the ability to impose penalties to those who do not follow the new regulations. The new rules will add to the cost of the hobby except to those who use FRIA-designated airfields. The AMA website, www.ModelAircraft.org, or the Casa Grande RC Flyers website, www.CasaGrandeRCFlyers.com, can be monitored for more current information. The FAA also has a website for pilot registration and other information at faadronezone.faa.gov.