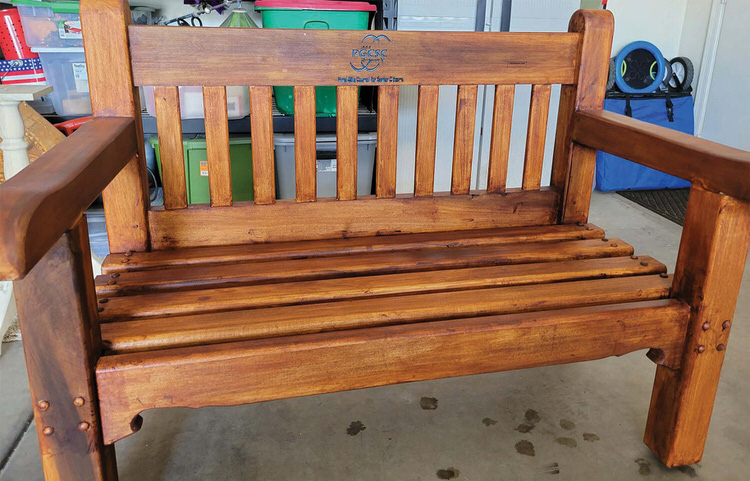 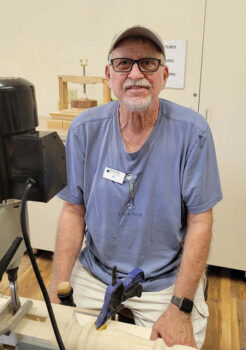 Richard in the woodshop

Richard Akes moved to Robson Ranch in 2008 with his lovely wife of 48 years, Belinda. I, and many others, watched Richard create and build the bench in the Desert Woodcrafters woodshop over the course of several weeks with a lot of curiosity and even more respect for his talent. Richard created the park bench as a donation to the Pinal-Gila Council for Senior Citizens (PGCSC), where Belinda is a board member.

Richard has been working with wood for more than 60 years and that shows in the craftsmanship of the bench, which is made of poplar and is a mortise and tenon construction. The only screws in the bench are in the seat. Richard’s inspiration for the bench came when he travelled to Boyce Thompson Arboretum, Arizona’s oldest and largest botanical garden in the heart of the Sonoran Desert. Five miles of garden paths and trails wind through 343 acres of plant exhibits and striking landscapes in Superior, Ariz.

Incorporated in 1974, PGCSC is a nonprofit organization designated as the Area Agency on Aging for Region V, which encompasses Pinal and Gila counties. PGCSC’s mission is to assist individuals in Region V achieve and maintain self-sufficiency with dignity and to offer choices of appropriate care by providing a wide range of community and home-based services. For more information on PGCSC go to pgcsc.org. PGCSC is currently building a park on McCartney Road in Casa Grande, so Richard thought a bench would make a perfect addition. We think so as well.

Next up for Richard is a pedestal for an antique tabletop and I cannot wait to see the finished product.