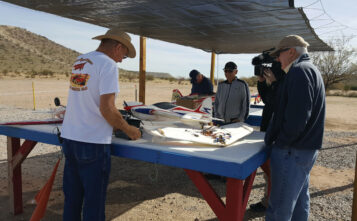 Paul Downey explains some of the finer points of RC Planes to the TV crew. 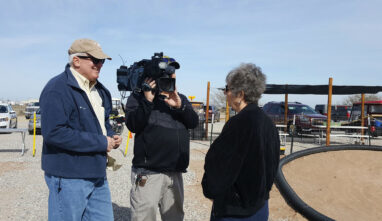 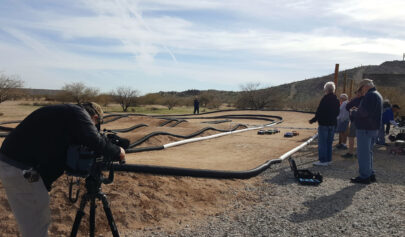 Cameras took in the car races from just about every angle. 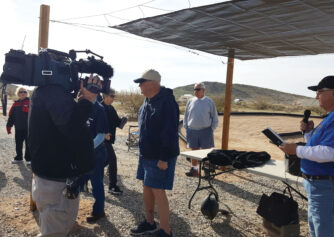 Paul Downey, Eddie Peril and Dave Hudson show off their flying skills for the cameras.

The TV crew attempted to interview as many club members as possible.

On February 2 a crew from the TV station spent two hours at the new facility doing interviews with club members, filming RC car races and recording some acrobatic flying by many of the RC pilots. In addition to their heavy duty video cameras, the crew also placed small cameras on the car tracks and on the cars themselves for some exciting video.

The field is located on the northern fringe of Robson Ranch and is accessible in less than five minutes from any home in the community by auto or golf cart.

The park, which consists of two runways for RC planes, an oval and off road track for RC car races, electronic lap counters, spectator area and picnic area, has ample parking for over 30 vehicles. Club membership has grown considerably since the facility was completed and now numbers about 60. Club members have access to the field seven days a week to practice or show off their RC racing or RC flying skills.

Car racing is held every Thursday at 10:00 a.m., and guests are welcome to watch the fun from the shaded spectator area. Club members will be happy to answer any questions about the hobby and offer advice to those who may be interested in joining the club. For more information contact Butch Spiller at 770-265-0358.