The wooden and wire fencing around the tracks help keep wayward trucks from crashing beyond the berm areas. 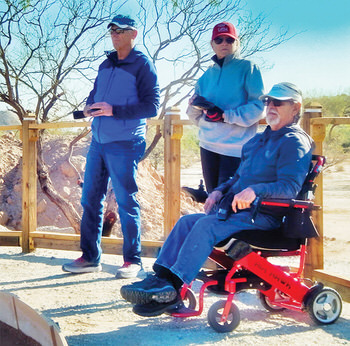 If you haven’t visited the Robson Ranch Radio Control Club’s facilities in the last few months, you will be amazed at all the improvements that have taken place, particularly the racetracks.

Thanks to the construction talents and oversight of Ken Fosnight and his army of volunteers, the grounds (located just north of the canal along the north access road to Robson Ranch) have become much more attractive and user-friendly for club members and visitors alike.

The upgrades primarily are for added safety. The gravel berms surrounding both tracks have been widened and strengthened, allowing greater space for participants in the racing events. The new designs also now allow for handicap access.

The tracks are now neatly surrounded by attractive wooden and wire fencing that help keep wayward trucks from crashing beyond the berm areas, especially in the turns.

The addition of many new racers also demanded additional pit tables, also designed and built by Ken with the help of others. Each Tuesday and Thursday, typically 35 club members are competing within the various classes, so the pit area becomes quite crowded.

Racers use a one-tenth scale off-road, two-wheel-drive truck. We compete in four skill classes: Novice, Intermediate, Advanced, and Master. Additionally, we offer a four-wheel-drive class and an open class, where anyone can compete using vehicles that don’t meet the usual requirements.

Competitions are managed with a very accurate electronic, computer-controlled timing system. We have two racing seasons, winter and summer, with class awards presented at the end of each season. In this current winter season, we present the colors at 9:15 a.m., followed by the first race at 9:30 a.m.

Members are provided with codes to open the gates to the facility, allowing for virtually unlimited access for practice.

Along with new members, we’re finding our spectator count each race day is expanding. Most often, a number of our pilot members are exhibiting their flying skills at the same time as the races, so there’s something for everyone!