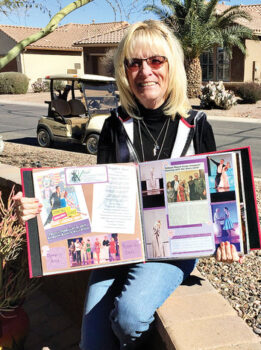 Creating a scrapbook rather than simply putting memorable pictures into a photo album, has more meaning for Linda Gayer on several levels.

One is that when she looks back, she doesn’t have to wonder, “when was that taken?” or “Who are those people in this photo?” or “They look familiar but I just can’t place them.” In a scrapbook, one enters the information that documents the photograph. Comments are often added as well. This will prove important in future years for family members who are trying to get a feeling for what their relatives were like and to become familiar with their interests.

Another is in the act of scrapbooking itself. It’s a creative outlet she describes as relaxing. Artistic touches are usually added to complement the topic, for instance, one might add clipart of golf paraphernalia to decorate around photos from a golfing trip.

The last part that makes it special is when her son or daughter visit and they look them over and reminisce—whether it is from their childhood days, or trips they took together. Even at home alone, she’ll sometimes take them out to revisit certain celebratory occasions.

Linda has some scrapbooks devoted entirely to vacations they took, but the majority serve like an annual family almanac, chronicling her family’s life for a particular year. She describes it as her approach to keeping a journal.

She first began scrapbooking while teaching English and World/U.S. History in the talented and gifted program at East Middle School in Plymouth-Canton, MI. One of her colleagues also was a representative for Creative Memories, which sold paper crafting supplies and equipment. She began a group with which Linda participated. Several teachers would meet after school hours a few days each week From 3 p.m. and sometimes staying as late as 10 p.m. in the teachers’ lounge, they’d work side by side on their scrapbooks. They then began an afternoon scrapbooking club that was attended by about 20 students.

After Linda and her husband Paul moved in as full-time residents in 2008, she met Pam Costner who is a consultant with the paper crafting company, Close to Your Heart. They, along with Robin Tisinger, would gather around the dining table in Pam’s home to work on their scrapbooks. When the Creative Arts Center opened, Pam formed the Robson Papercrafting Club and Linda was one of the first official members.

Linda still sticks mainly to scrapbooking, while many other members are more interested in making personalized greeting cards. But, she says, with the rising cost of ready-made cards, she may just start adding card-making to her list of projects.