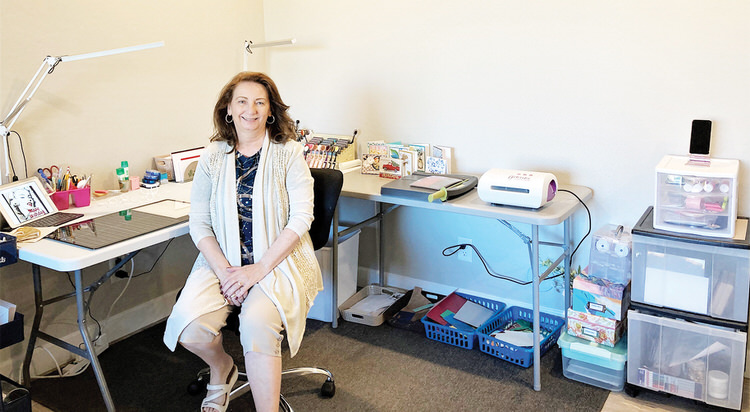 Trudy in her craft room 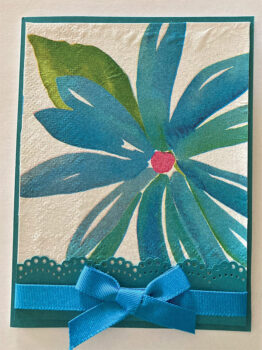 A napkin card made by Trudy

It’s been only five years since Trudy Foslien was introduced to paper crafting, and she is already highly successful with novel projects.

A friend mentioned to Trudy that she was scrapbooking. “What is that?” Trudy asked. After being shown some projects, Trudy knew she had to try it herself and enjoyed it immensely. A couple of years later, she came across a YouTube video of someone making greeting cards using cutting dies, stamps, and inks. Trudy ordered some and made a birthday card for her scrapbooking friend who loved it and started making cards herself. They both sought out new creative projects and kept inspiring each other.

“I love challenges,” Trudy says.” I get an idea in my head, go to put it down—it doesn’t come out the way I planned. I tweak it a bit. Sometimes it ends up in the trash, but sometimes it turns out better than the original idea.”

A winter resident here since March 2019, Trudy and her husband Karl return to their summer home in Ferndale, Wash., to escape the Arizona heat. She joined the Paper Crafting Club soon after moving here, then left for the summer. Next came the pandemic lockdown, so it took a while before she was able to actively participate, but she is an eager and enthusiastic member. Trudy says, “I’m so grateful to find a group of women to learn from, share with, and have a great time with. There are some really talented and knowledgeable women in the group. I learn a lot and am able to incorporate some of their ideas and techniques into my cards.

“I love that we do charity work. It gives me purpose. I’m fortunate to have the life I’ve got—not everybody is so lucky. I like to give thanks to the people who protect us. We tend to take them for granted. We’ve given to nurses, the food bank volunteers, and others. I’m glad to be a part of that. It’s important to recognize people who are helping others.”

Fascinated by seeing napkins being used to make cards (again in a YouTube video), Trudy tried it and found it was a lot of fun to make. Asked to teach it in a class for the Paper Crafting Club, she admits, “I was really nervous and unsure if people would like it.” But her worries were for naught. “Everyone kept saying things like, ‘I can’t believe I made this!’ and ‘This is really beautiful.’”

Trudy estimates she spends three to four hours a day on her paper crafting. “When in the midst of a project, I’m very focused. I’m happy and grinning from ear to ear. I forget everything else. As to the end product, if it turns out the way I envisioned, I’m thrilled. Then I turn to something totally new.”

She still enjoys scrapbooking as well, and has created almost 25 albums to date. Some are family albums, some are based on trips.

As we wrapped up the interview, Trudy added one more thought: “I love that we have a birthday list for all our members. I love making a special card for each one.”