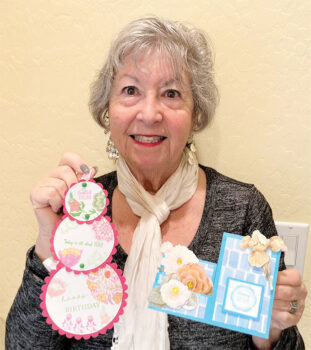 “I don’t have a creative bone in my body.”—Jaine Toth’s plaint of her younger years. After attempts at sewing, knitting, crocheting, needlepoint, macramé—the typical handcrafts—and failing, Jaine figured she’d missed out on the arts gene. Eventually she caught the acting bug as well as the one for writing. Pleased to have these creative outlets, she no longer felt a yearning to make art with her hands. Then she moved to Robson Ranch and the Creative Arts Center beckoned.

Jaine took a couple of classes with the fine arts group and quickly realized her talents did not lie in that arena. She joined the Pottery/Ceramics club, and then Gourds. Although she was pleased enough with some of her crafts that she’s put them to use or on display in her home and felt confident enough with a few to use as gifts, the learning curve was going to be long—much of her output appeared as though it had been made by a child. Next, she noted that Pam Costner announced a paper crafting class. Jaine signed up, spent much of it feeling confused, making errors, and having to start over, yet somehow, she knew this was the craft for her. “The draw,” Jaine says, “is that crafting attractive greeting cards to brighten someone’s day, especially with the knowledge that they were handmade, is a joy.”

She tries to take as many of the offered classes as she can manage. She still stumbles with some techniques but enjoys trying it again and again until she gets it right. There’ve been so many clever, artistic techniques that it becomes a challenge later to decide which ones to do.

Jaine also appreciates the Paper Crafting Club’s outreach—creating cards for worthy organizations throughout the general community. She’s also in charge of ensuring that condolence cards are made and delivered to those in our community who’ve lost a spouse or other immediate family member.

Once elected club president, Pat Serveiss wheedled Jaine into joining the board. Pat just wouldn’t take “no” for an answer (which was given several times). So now Jaine serves as the club’s PR person and writes articles for submission to Robson Ranch Views and the Mid-Week Scoop.

Unlike many of the club members, Jaine doesn’t have a dedicated space for paper crafting at home and does most of her work at the studio during the club’s Thursday afternoon sessions. On occasion she manages to rise early enough to join them on a Monday morning.

She looks forward each March to their “Crop Till You Drop” event where members reserve a table for two full days where they can set out their supplies and equipment and come and go as needed without having to pack it all up and then reorganize it on their return. It’s an opportunity to make enough cards to replenish their stock.

Jaine recently introduced two friends to paper crafting, and both have joined the club. She invites anyone who is curious about it to come and give it a try. The camaraderie makes it an uplifting experience. She invites all of you to come check it out.