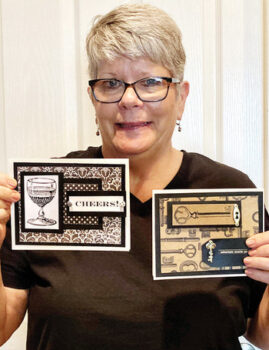 After retiring, Doreen Beers and her husband A.J. moved to Robson Ranch in July 2019. She loves it here and she loves the free time to pursue her arts—paper crafting and watercolors—time which was limited while working full time.

Doreen created a space in the walk-in closet which she calls her happy place. Her clothes hang on one side and she’s arranged the rest for her artson the other—her own little creative cubbyhole.

She will take a sentiment stamp and make multiple copies, cut them out and place them in themed folders. When ready to make birthday, get well, or other types of cards, she pulls out the pertinent folder, selects her papers and embellishments, determines the layers and design, sets them up assembly line-style, and proceeds to make a batch of cards.

Doreen’s favorite embellishments are brads. She finds unusual ones through an app called Wish and on eBay. For instance, she ordered some shaped like keys, then searched for paper containing keys in its design. She does a little bit of work in color, but the vast majority of her cards are black and white, with some in various shades of brown and beige.

Black and white is her main choice. “It’s easy to get things to match,” she says. “I can put a lot of different patterns together and it’s still cohesive. That’s more difficult to achieve with colors. Also, black and white seems so crisp; it’s elegant. Even in fine art, most of my work is monochromatic, for example, cotton is a favorite subject to paint. It’s my comfort zone.”

Doreen makes the majority of her cards at home, but loves going to the Paper Crafting Club. “It’s so much fun, and I like learning from what others are doing.” She likes to flip through the paper stock until a particular pattern speaks to her. She says, “The paper inspires my designs.”

Another place Doreen gets ideas is by perusing Pinterest. She takes pictures of designs she likes and tries to replicate them at home. She also purchases books of interesting papers from eBay.

When she assembles patterns and solids that complement each other, Doreen finds a lot of joy in the process of layering them into various designs. When she’s at work on a project, Doreen’s entire focus is on the work. “I go into a zone; the world disappears,” she says, and adds with a smile, “I would do it all day if I could.”

She almost always gets enthusiastic appreciation from people who receive her cards. One person even mentioned it effusively on Facebook. At times, Doreen finds herself loath to part with particular cards. “Sometimes I don’t want to give them away. I have a special box for my favorites. They’re the best I’ve made and I love everything about them.”

You can find Doreen at most of the Robson arts and crafts shows where her cards are popular with buyers.