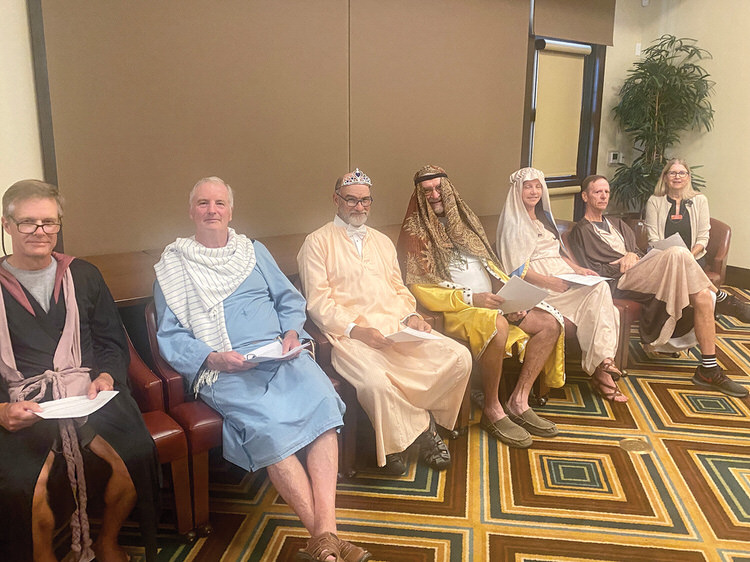 Friendship Center Church held a non-traditional Palm Sunday worship on April 10 in the Laredo Room of the Ranch House. Members of the congregation acted in a play called “The Trial of Jesus.” The roles included: Caiaphas (Ken Muhlbeier), Pontius Pilate (Ron Carpenter), Judas (Jeff Dorn), King Herod (Ron Weber), Peter (Milt Calhoun), Mary Magdalene (Teresa Jo Fletcher) and the Court Bailiff (Jane Minish). Pastor Ron Kleinke, who wrote the book on which the play was based, acted as the Attorney for the State.

Each character was sworn in by Bailiff Jane Minish and agreed to tell the whole truth. Only Pontius Pilate refused to swear to God, rather he swore on the name of Julius Cesar. The Attorney interviewed each participant as the congregation listened intently to the testimony. After each interview was complete, the Congregation, serving as the Grand Jury, were allowed to ask questions.

Each actor dressed in character and through their testimony, brought to life the final days of Jesus Christ. Mary Magdalene spoke of how much she loved Jesus and was in awe of the miracles He performed. Peter defended himself when accused by others who said they had seen him with Jesus in his final hours. He admitted he denied Christ as prophesied. Judas insisted he was not the bad guy that everyone claimed he was. Pontius Pilate related how he wanted to wash his hands of the entire situation.

The play provoked thought and reflection among the audience. In closing, the State’s Attorney (Pastor Ron Kleinke) noted that Jesus was an innocent man who was put to death. Yet, he noted, everyone was saved by Jesus dying for our sins.