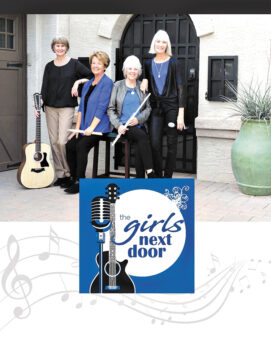 Making its debut in 2020, The Girls Next Door is the only all-female band here at Robson Ranch.

The band is comprised of Connie Koza, guitar and vocals; Gerri Bradley, keyboard; Connie Drew, percussion; and Lisa Hunt, synthesizer and vocals. They play a variety of music, covering the genres of rock & roll, country, rock, love songs, and even a couple of disco tunes to get you to sing along, clap, and get out of your seats and dance. Their motto is to have fun, try new things, expand your horizons, and smile while doing it.

All four members of the band are instrumentalists and part of the Robson Ranch Singers. They got the inspiration to start a band after a Robson Ranch Singers rehearsal. Connie had just received a drum set for Christmas in 2018 and said, “wouldn’t it be fun to start a band?” The idea didn’t immediately catch on, but four months later, over lunch at the Grill, the concept took form. Now, the female band rehearses in Connie’s and Gerri’s garages and has a bunch of fun, and lots of laughs in the process. But it’s time to emerge, and as Lisa said recently, “Ladies, it’s time for us to get out of the garage and leave the nest!”

Well, they are ready to go and hope you’ll be there to have fun, too!

Please join The Girls Next Door, at their debut at The Grill, Wednesday evening, Feb. 5, as part of Robson Unplugged.

Contact them for your next special event at [email protected]