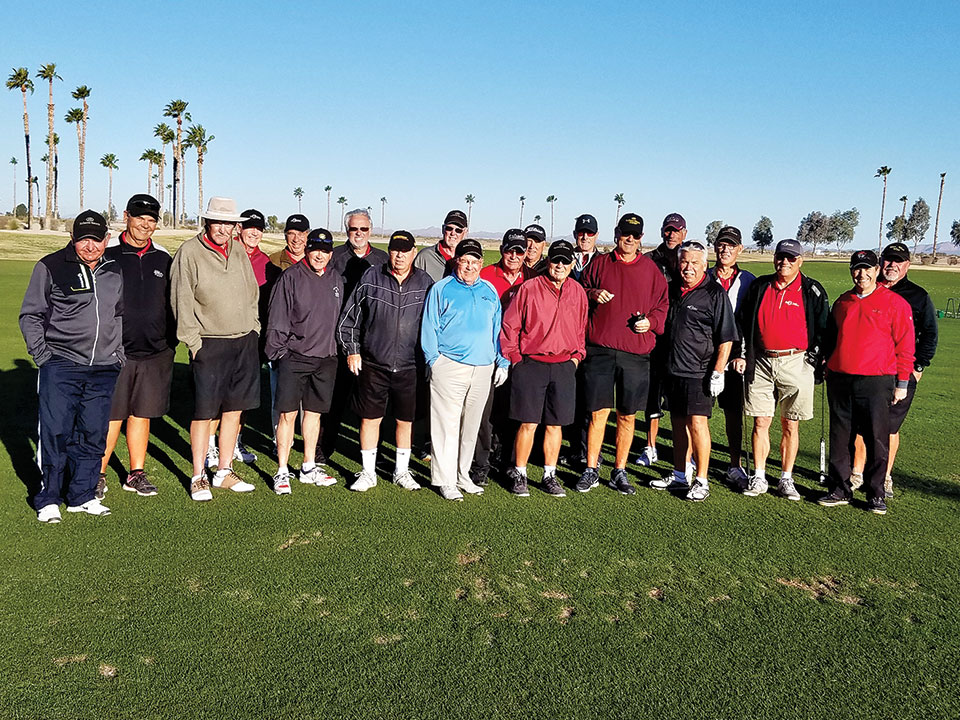 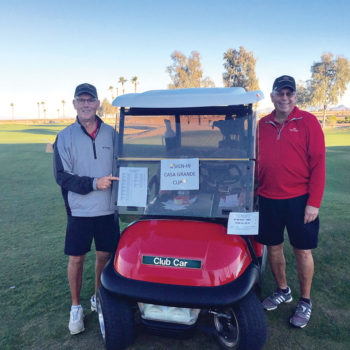 Don Juillerat and Russ Stocek ready to check in golfers

On February 11 the first team from Robson Ranch played at Dave White in two-man teams against Dave White. Mission Royale also had a team competing against them. We played nine holes of Best Ball and nine holes of Alternate Shot. Robson won seven points while Dave White won five. But Dave White split with Mission resulting in Dave White having 11 points compared to Robson with seven points and Mission with five points.

On February 12 the second team from Robson then played at Mission Royale playing the same Best Ball and Alternate Shot format. However, the result was Robson only winning three points, giving Mission Royale a commanding lead as Dave White won only two and one-half points. Thus at the end of day two of competition, Mission Royale had 24-1/2 points to 10 for Robson Ranch and 13-1/2 for Dave White.

The third day of competition on February 15 was individual match play. Our 24 players competed against the players they had previously played but this was at our course, Robson Ranch. We all played valiantly and obtained 10-1/2 points for Robson Ranch out of 24 available points. Unfortunately this was not enough to overcome the sizeable lead held by Mission Royale.

The final score was Mission Royale 33 points, Robson Ranch 20-1/2 and Dave White 18-1/2 points. A trophy was presented to Mission Royale as well as the bragging rights for 2017. This was the first year of this event, and it is anticipated to be an annual event as fun was had by all who participated from the three clubs. Next year I am sure that we will do better!

A special thanks goes to Don Juillerat and Eldon Lee who assisted me, Russ Stocek, in forming the event and working with Mission Royale and Dave White. The banquet staff provided us with a lunch after the event in the Hermosa Ballroom.