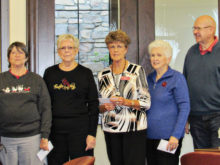 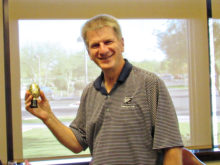 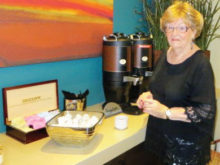 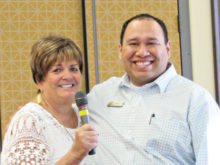 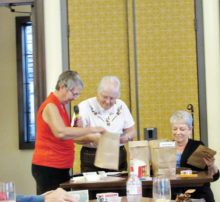 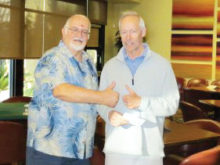 The Wednesday Social Bridge Club held its holiday tournament on December 6 from 9:30-3:30. Lunch was provided by Heather Hardesty of Robson Ranch Banquet Department. Benjamin Castro, Robson Ranch Food and Beverage Department, donated cookies for the luncheon. The Bridge Club is headed by Carol Male. She showed up before 8:15 a.m. to oversee the setting up of the tables and to make sure things were in place for the day’s events. Will Steeves and Rich Cronk (who we lovingly nicknamed Martha Stewart) arrived early to assist Carol with moving tables and getting them set for play. Karen Marfice handled registration and also donated door prizes for the event. Babs Barney-Steeves, Jaclyn Marshall, and Linda Sue Jensen ran the tournament and handed out prizes.

Bridge play consisted of six rounds of six hands each. Rotation of tables and partners took place after every round. There were several prize categories as well as prizes for top scores. A goose egg trophy was given to all players who had a zero score at the end of a round. Top prize of the day went to Don Wilson who had a total score of 6580. Dell Hoff took second place with 6320 points. Third place went to Terry Price with 5850.