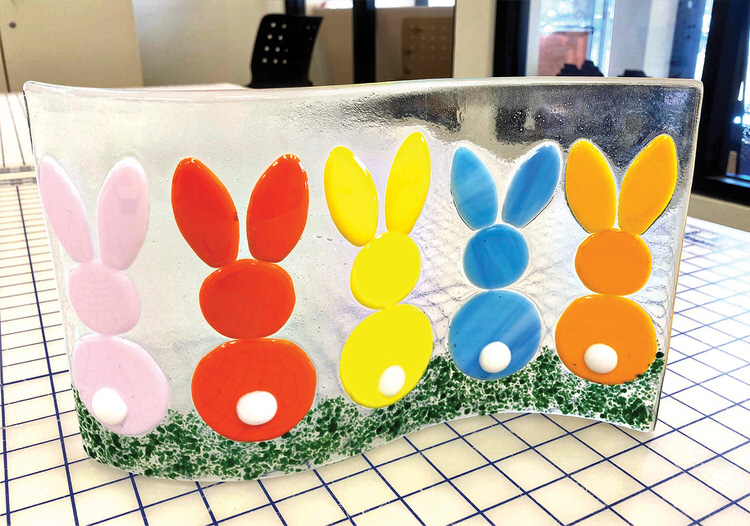 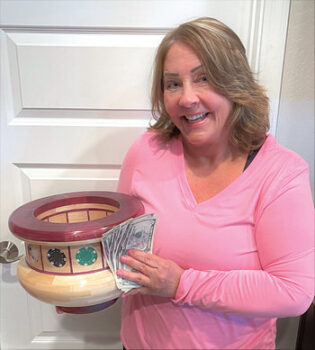 Meet our April Fused Glass Club member of the month, Tamara Weaver. Tamara is first to admit that she is obsessed with fusing, as she is one of our most dedicated and regular members.

Her journey to Robson Ranch started in Sioux City, Iowa. She joined the Iowa Air National Guard right after early graduation from high school— the 185th Tactical Fighter Group out of Sergeant Bluff, Iowa. After completing her active-duty requirements, she earned her nursing degree back in Sioux City.

She has been married to hometown beau, Dean (Dream) Weaver since 1984. She and Dean both enjoyed softball, and if she wasn’t on the field pitching her high arch precision pitch, she was sitting in the stands, watching Dean, always with a pitcher of beer close by for all to share. In 1987, they moved to Seattle, and her softball skills earned her an MVP award at the 1989 USSSA Women’s State Tournament.

They later moved to Minnesota in 1991, and fast forward 30 years and with retirement on the horizon, they journeyed to Arizona with their daughter, Coltyn, to look at age 55+ communities. As soon as the three of them drove into Robson, Coltyn pronounced, “This is where mom is going to live!” Tamara was thinking it as Coltyn was saying it.

Tamara and Dean both retired in 2021. They are both so happy to have made it to retirement and feel extremely blessed to have landed at Robson Ranch. You’ll see both of them at aqua aerobics, cornhole, cribbage, softball games, concerts, card tournaments, parades, and all the wonderful and fun events offered at Robson. Of note, Tamara recently was awarded the “Last Woman Standing award” at the Annual Robson Poker Tournament! Way to go, Tamara!

Though Tamara and Dean live at Robson year-round, her son who lives in Minnesota recently purchased a home with a dedicated bedroom for the both of them. That and with her daughter Coltyn giving birth in November 2021 to a beautiful and healthy granddaughter named Lakota, Tamara will have to split her time between the awesome activities at Robson and frequent trips back to Minnesota.

We are happy that Tamara is obsessed with glass fusion. You may frequently hear her say if only aqua aerobics class time went by as fast as glass fusion time, life would be awesome. Though she believes she has little to no artistic talent, glass defies truth and allows anyone to create extraordinary projects and gifts.

The Fused Glass Club is made up of members like Tamara, those who enjoy the social atmosphere and who want to flex their creative talents! If you want to find out more about glass fusing, please email Doris Betuel at [email protected] We would love to have you join our fun and diverse group of artists!