This progressive art show was fabulous. I usually have my fused glass in a six-week show at Red Butte Arboretum in Salt Lake City (SLC) during this time period. It was so nice not to have to make two trips to SLC to do that show. It was also nice to have all day yesterday to stage it and talk it up to people walking by.

Can you imagine Connie’s relief of not having to pack and repack all this yard art to go to Salt Lake?

Bob Smith shared Nils Johnson’s garage where he displayed his various oil paintings. Bob is one of only a few oil painters.

Paula is another one of our many talented artists who does both watercolor and acrylic painting. 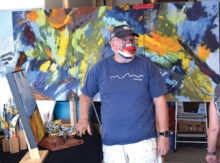 Nils Johnson displayed the largest piece of work at 4 ft by 9 ft. Nils also exhibited his talent as an architect and woodworker with his small, but accurately scaled work of Frank Lloyd Wright. 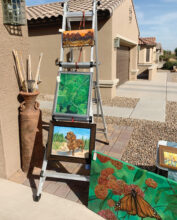 Gail Bamford stated, “I really enjoyed having it at our homes as I was able to display much larger paintings without space constraints.” 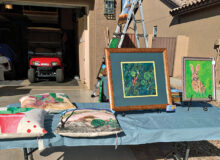 On the sunny Nov. 21, the annual Art Show and Sale was held despite all the indoor Robson Ranch facilities being closed to the public. The Fine Arts Guild’s board voted to use the progressive dinner concept while following the HOA and CDC guidelines to hold their annual show and sale. Seven guild members opened their garages or used their yards for the display of their artwork. Numerous Ranchers planned their routes early. With a garage in each of the villas and resort homes, many visitors saw new areas of the Ranch while the newbies went to earlier, more confusing developments of Robson and learned about the segmented streets (due to green areas and washes) of Grand Canyon, Nogales, and Pueblo.

Residents commented on liking the idea of going through the community and checking things out. The sale was popular among those visiting and buying. As for the artists, they liked the idea of a few people exhibiting their artwork at each stop with the number of stops limited. Compared to having the show/sale inside the Creative Art Center, which was always overcrowded, people had a chance to chat with the artist without bypassing some displays because of congestion. With the extra room provided by garages and/or yards, people were able to display larger items and step aside to speak without blocking the views of their displays. All the artists were pleased with the response, claiming they sold more using this type of venue than at the Hermosa or the Creative Art Center. Not needing to pack, unpack, and repack their items was also seen as another plus by participants.