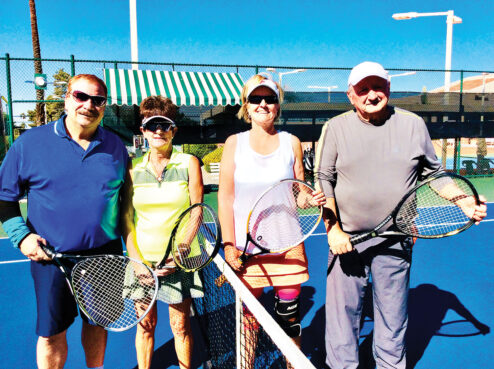 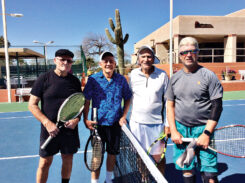 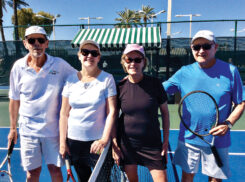 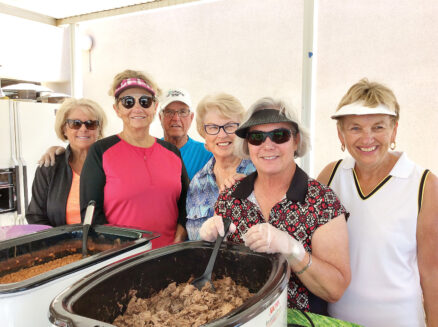 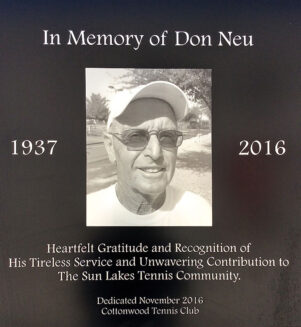 The Don Neu Charity Tennis Event was held at the Cottonwood Courts Friday and Saturday, March 15 and 16. There were 123 players participating from six communities: Cottonwood/PV, Iron/Oaks, Sun Lakes CC, SunBird CC, Springfield and Robson Ranch. Fifty-six matches were held. The Chandler Boys and Girls Club Tennis Program, where Don taught, will benefit from the fundraiser.

The event was named in honor of Don Neu, long-time Cottonwood tennis pro in the spirit of Don’s love of tennis, of learning and mixing levels of play. Don was hit by a car on Riggs Road while riding his bike home from breakfast at McDonalds in 2016. His wife, Sandy, spoke at the ceremony held in Don’s honor during the Saturday luncheon. Don also started the free lessons for new players held at Cottonwood. Lessons are now led by Pierre Moresi.

Those wishing to participate signed up individually and were assigned to a team by the tournament director and his staff. The 123 players were divided into four teams: Cardinals, Suns, Coyotes, D-Backs. After two full days of play, the Cardinals led the pack with 218 games won, followed by the Suns with 167, the Coyotes with 164 and the D-Backs with l57.

Many spectators attended the event and participants enjoyed mingling with players from so many other communities.

This event ended the major tournaments and socials for the spring season.