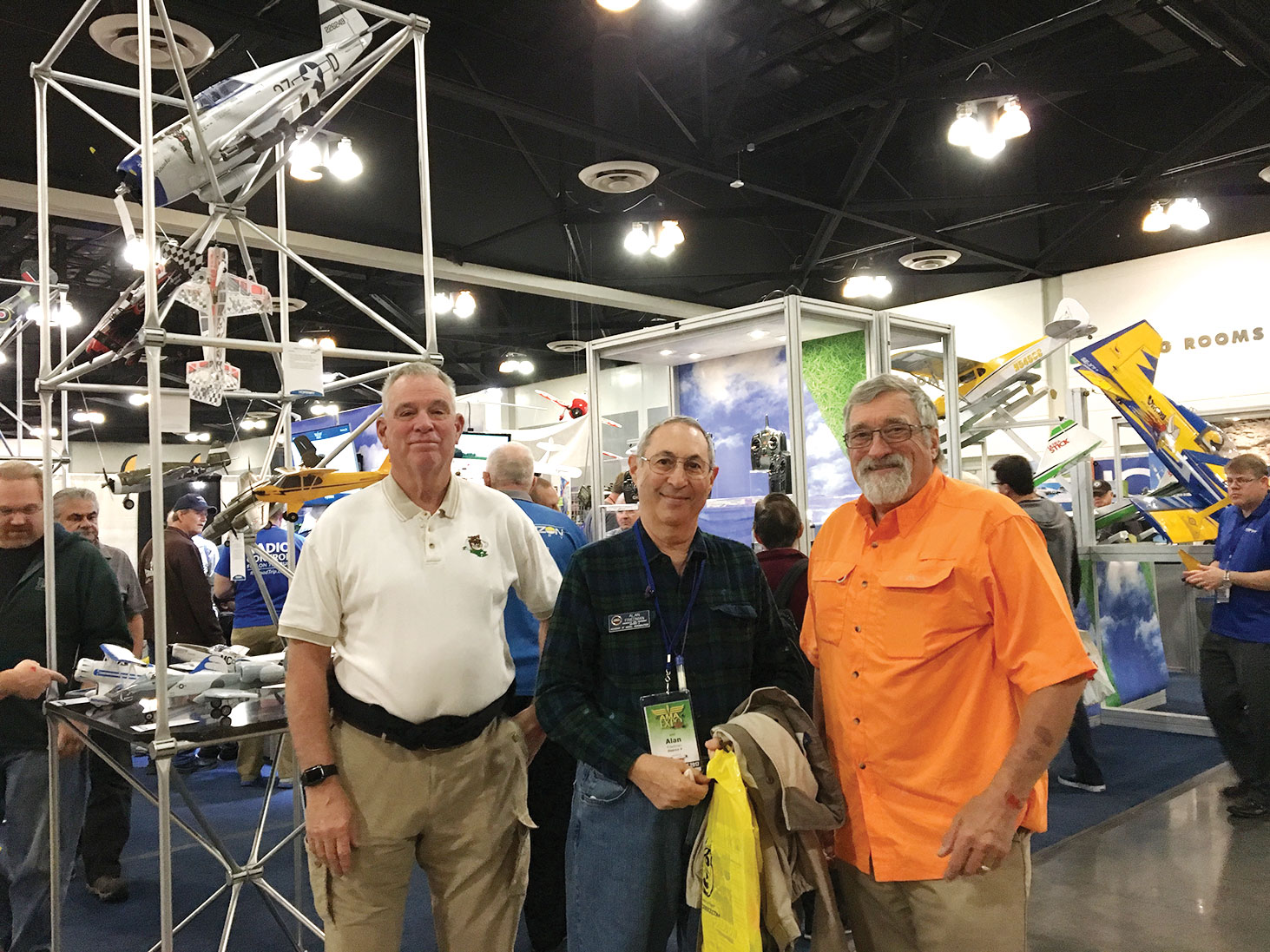 Alan Friedman, center, and another Casa Grande RC Flyers officer and member attending the AMA Expo in Ontario, California in January. The club had four board members and several general members attend.

Besides this year’s gigantic air show scheduled for March 11, 2017 at the Casa Grande RC Flyers field, the club has filled the season with activities and special events. Their events draw spectators from all over the area. Last year over 300 people attended the air show alone! This year’s air show benefits the Valley Humane Society, which will have representatives accepting donations at the gate. New this year, the club offers free model airplane flight training to any individual wanting to learn to fly a model aircraft. An expert flight instructor will teach using “dual flight controls” allowing you to actually fly the instructor’s model. Free “first person view” airplane flights will be offered again this year. First person view allows you to see what the pilot would see from inside of the aircraft. That was very popular last year. Finally, highly skilled pilots will also perform stunts during a special one-hour period from 10:00 until 11:00 a.m. with other pilots flying during the remaining event hours. A food truck will provide the breakfast and lunch food service. The event hours will be from 9:00 a.m. unit noon.

In November the club held a National Model Aviation Day celebration and raised money and supplies for the Casa Grande Food Bank. They also held their first fun fly contest when a member won a gift certificate towards a new airplane. They have been holding swap meets monthly that draw flyers from all over the valley. In December the club had a dinner meeting at a Casa Grande restaurant where the membership helped plan the club’s future. At that dinner a new “ready to fly” quad helicopter and two other prizes were awarded to members via a drawing. A major January event was the club members attending the Academy Of Model Aeronautics Western Expo in Ontario, California. They attended seminars on flying and viewed new products displayed by manufactureers and vendors. It was an exciting and educational weekend.

The club revised its fun fly contest rules so that everyone, regardless of skill level, has a chance to win one of the many prizes that were donated to the club. Anyone who enters a contest will be given a drawing ticket and has a chance to win. The club hopes this encourages more novice flyers to enter. A schedule of the club events and directions to the Casa Grande RC Flyers field near the Casa Grande shooting range can be found on the club website at www.CasaGrandeRCFlyers.com.

Membership is open to anyone wanting to fly or learn to fly radio controlled aircraft. Free lessons are offered by nine AMA certified instructors. The Casa Grande RC Flyers and its flying field should not be confused with the field and club located within Robson Ranch.

Membership in the Academy of Model Aeronautics (AMA) is required because the membership provides required insurance coverage. To join, contact Alan Friedman, the club president and AMA Associate Vice President, at his Robson Ranch residence or view the club web site. The Casa Grande RC Flyers is thankful for the editorial support of Robson Communities in promoting our events.