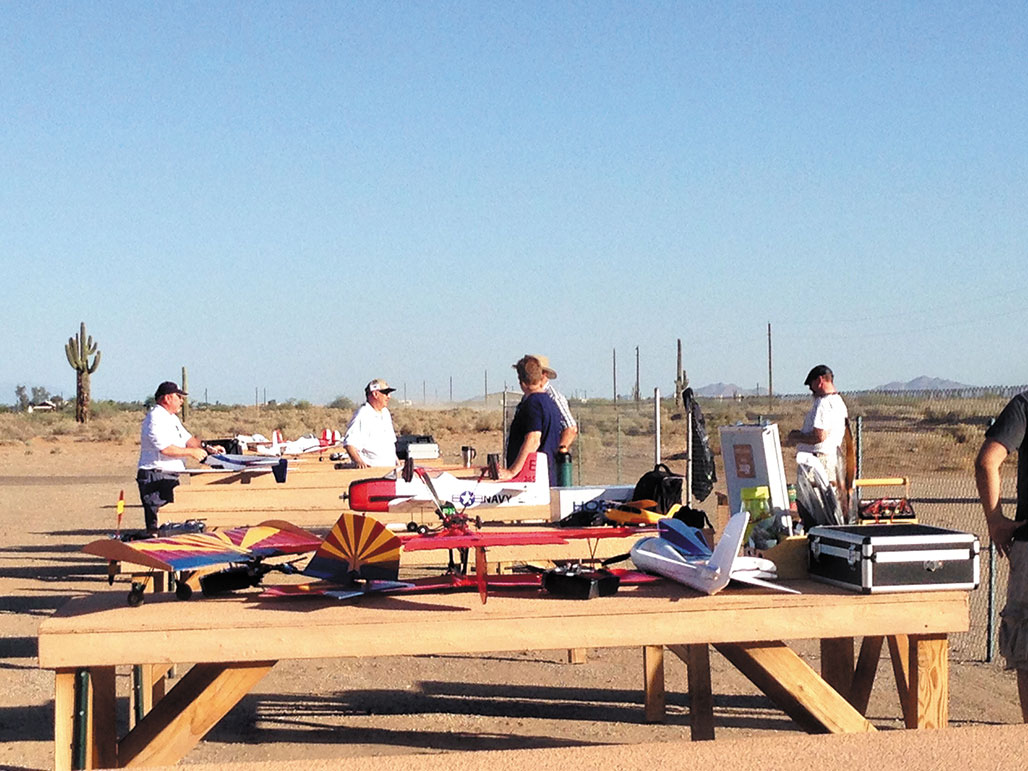 Some of the members flying that morning to raise funds for Wounded Warriors.

Shortly after dawn as the sun slowly rose behind Casa Grande Mountain on Saturday, August 16, they started trickling into the parking lot. It was still relatively cool with the mountain shading them from the sun, a blue sky and calm winds. It was a perfect morning for flying. Some came for the love of flying, some came to watch and some were lured into coming by the raffle of a free airplane for a donation to the Wounded Warrior Project. By 6:30 a.m. there were airplanes in the air and the camaraderie started.

Every year as the Academy of Model Aeronautics celebrates National Model Aviation Day, members take up the cause for the Wounded Warrior Project and collect donations around America. Some members were warriors themselves at one time and remember the wounded. Here in Casa Grande, where it is always hot on this chosen day and flying must be held early in the morning to avoid the heat, the turnout was larger than expected at the Casa Grande RC Flyers field.

Some of the members brought only one plane to fly while another had a trailer full. There were biplanes, single winged planes, helicopters, a jet and a glider. Many of the club members were taking off and landing on the newly surfaced runway for the first time. One member, whose quad helicopter was outfitted with a camera, took an overhead video of the field and surrounding area.

A tidy sum was collected for the Wounded Warrior Project with Arvin Van Ry winning the first prize of the raffle, which was a model airplane donated by Viper Hobbies of Mesa. Roy Johnson won the second prize of a gift certificate donated by Sig Manufacturing, a model airplane manufacturer, located in Montezuma, Iowa. Those not winning the raffle went home with memories of a fun day and the camaraderie of their fellow flyers.