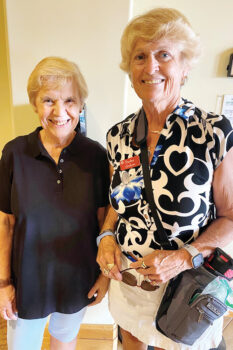 Tennis Club held its annual election for three offices on the executive board for the fiscal year of July 1, 2022, to June 30, 2023. Two members of the board have one year remaining, and are Pauline Graham, secretary, and CJ Azaria, who was appointed as member-at-large after a recent resignation.

Originally from Pittsburgh, Penn., CJ and her husband, AZ, who also plays tennis, moved to Robson Ranch in 2014 from Pahrump, Nev. She plays tennis with women’s doubles, teaches the line dancing classes here at Robson Ranch, and is very active in the Pottery Club.

After residing in Wyoming, Pauline and her husband, Bob, also a tennis player, moved to Robson Ranch in 2018 after residing in Fort Myers and then Port Charlotte, Fla., for many years. Pauline enjoys playing Mah Jongg, Hand/Foot/Knee, and Bridge in the Sports Club. Recently, she was lucky to have two sons purchase homes in Robson; Kyle, who plays tennis, and Tony, who still works but enjoys tennis, too. Looks like tennis is a family affair!

Check out the Tennis Club bulletin board, which is located right outside the Sports Club, for information on the events that are planned for the upcoming season. A few but not all events include the Friday Night Social, which is held on the second Friday of each month, restarting on Friday, Sept. 9, with tennis play from 4 to 6 p.m. followed by dinner in the Fireside Room for all club members. Intercommunity tournaments are scheduled with Sunbird, Springfield, Trilogy, and IronOaks communities—Nov. 5 is scheduled with Sunbird Community and Nov. 19 is with Springfield Community, both located in Chandler.