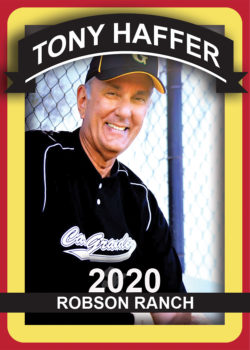 Born in the borough of Queens in New York City, it’s little wonder that Tony Haffer’s earliest baseball memory occurred in 1956, when his uncle just about swallowed his cigar leaping out of his chair. “He did it, he did it!” he exclaimed! “He” was N.Y. Yankee pitcher Don Larsen, and what he had done was pitch the first, and only, perfect game in world series history. This event turned young Tony into a N.Y. Yankee fan, and he soon developed a fascination for their center fielder, number 7, Mickey Mantle. Six years later, Tony was in Yankee Stadium when Roger Maris recorded another historic feat by breaking Babe Ruth’s single season home run record.

Feats such as these sparked the imagination of the young New Yorker, who first played baseball with rubber balls on city streets where cars and sidewalks provided the background, instead of green fields and fences. His mother finally forced him to try out for the church little league team. Tony remembers the early practices as an attempt to hide with embarrassment because his glove was a mitt with no webbing. After appealing to his mother, she bought him a three-finger glove with webbing and a lifetime of playing ball began.

Playing baseball in New York City had its own peculiar kinds of challenges because of the lack of space for ballparks. Most practices were conducted in empty lots and city parks with no pitcher’s mound, infield, or boundary fences. The only access to ball fields was on game day. Playing high school baseball in Long Island city and college baseball in Harlem brought some relief to the situation, but always involved taking the subway and/or bus rides to real baseball fields. Despite the inconvenience of having to use public transportation, the advantages of escaping the closed in, confines of urban settings was a welcome relief for city kids.

When asked “how did participation in baseball influence the adult you?” Tony replied, “Participation in a team sport was instrumental in forming a desire to join with others in hopes of accomplishing a positive result. Equally it was a terrific means to meet new friends and enjoy their personalities and ideas.”

Tony was first introduced to softball in junior high but had no interest until his post college years when fast pitch softball became the best replacement for his first love. “Fast pitch was much more like baseball,” said Tony. Slow pitch softball arrived in Tony’s life at middle age and soon became an important activity.

Beginning in 2009, Tony was among the very first players to wear the Robson Ranch softball jersey and compete in both league and tournament contests. Something that is very much a source of pride for Tony. “I was astonished at the number of guys who were playing and playing well. After a 15 to 20-year absence, “I was once again striving to hit, throw, and catch the ball well. What a gem senior softball turned out to be.”

The unrelenting support of his teammates has and continues to inspire Tony to “try and try again in hopes of doing a better job.” Additionally, he credits his wife Beverly as an understanding wife that puts up with the “moans and groans” that come with the softball experience.

From the perspective of a fellow player, this reporter can assure Tony he has, and continues to, inspire many of us who play softball at Robson Ranch. Thank you, Tony, and may you have many more years of the game you love.