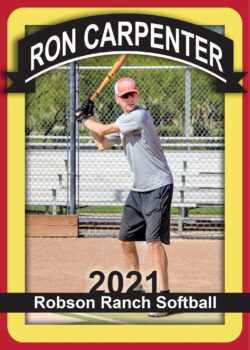 Every winter in upstate New York, the freezing of the local ponds in Elmira would signal the start of another season of neighborhood hockey games for Ron Carpenter and his brothers. Combined with various other sports such as baseball, football, and volleyball, friends and neighbors joined together to enjoy a kind of neighborhood Olympics. Organized baseball was one of the primary sources of bonding and provided many opportunities for multiple family gatherings and the building of childhood memories for Ron and his family.

“I am the oldest boy with three younger brothers. My youngest brother was the best athlete because he was always trying to keep up.” Ron recalls his dad was his biggest influence in sports because he coached Ron until he was 13 years old. “Patience was his biggest virtue,” but sportsmanship was highly valued, as Ron learned when his dad benched him for showing up one of his teammates. “I was just an average athlete so my experience playing sports was primarily against my brothers and friends around the neighborhood. I was a fairly good pitcher in little league, and in the last game of my little league career, I pitched a two-hitter with 12 strikeouts.” Ron also had the unusual situation of having his Babe Ruth coach become his high school baseball coach. This seemed like a perfect case scenario until the coach cut Ron from the team. “He was more upset than I was,” remembers Ron. “To me it was an obvious situation.”

Ron had never played on a championship team in any sport until he started playing softball in the Army at Fort McPherson in Atlanta. “I hadn’t played baseball in quite a while and wasn’t sure what to expect. It was extremely competitive and there were some seriously talented players. Winning the post-championship in my first year of softball got me hooked,” says Ron. “I played continually until my son was old enough to play, and then I started coaching him.”

Twenty-five years passed until Ron once again started playing softball. This time it was at Robson Ranch. Not only has Ron turned out to be a tremendous player, competing at the B level, but he is also a major contributor to the club by serving as club representative to the Palm Creek league. A former board member, Ron also took the job of creating, organizing, and scheduling our new, highly popular, Saturday league. This includes creating the teams, making up a schedule, finding coaches, handling the jerseys and other equipment, and many other important tasks.

The Robson Softball Club wishes to recognize and thank Ron for all that he does. It is people like him that make softball a rewarding and fun activity for all who participate. Ron, in turn, wishes to thank his wife Sandy because as Ron states, “she doesn’t mind the amount of time I spend doing softball.” Thanks, also to you, Sandy.