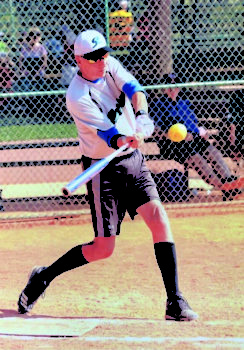 Before Paul Lewinski became “Mr. Softball” at Robson Ranch, he was a struggling little league player in Schenectady, New York. When asked what position he played in little league, his response was “anywhere they could hide me.” Paul admitted he spent a good deal of time worrying less about performance on the field than having to face fastballs thrown by Rusty Vitalo. Fastballs that were known to find as many hitters as they did strike zones. He also spoke of wool uniforms that were itchy, fields that were bumpy, and bats that were too heavy for young players.

Baseball took an unusual and unexpected turn for the better at age 12, when Paul was excitedly waiting for a chance to try out for the best Babe Ruth team in the city. Unfortunately, as the afternoon wore on and his name was not called, Paul’s father told him they had to leave so Paul could go to his accordion lesson. “Very disappointed” was how Paul described his reaction to his father’s decision. What Paul didn’t know was that by missing the tryouts that day, he would end up playing in a summer recreation team that was coached by a man who would help send him on his way to the success, and the fulfillment that he craved.

Success in high school as an infielder, coupled with playing quarterback and defensive safety for the football team, prompted Paul to offer this response to the question. “How did participation in baseball and other youth activities shape the adult you?”

“The confidence gained in my physical ability and the rewards gained through disciplined training, gave me the knowledge that when applied, I could accomplish college and achieve good things in my life.”

When Paul first reached Robson Ranch in 2007, there were no organized softball teams or play. There was a list of 36 people who had responded to a questionnaire indicating they may be interested in playing. Making phone calls and organizing practices led to the first Robson Ranch softball team to take the field in February 2008. Playing other, much larger Robson communities that were better practiced led to some long games and lop-sided scores. Paul mentioned some names from those early teams and wanted to recognize Paul Gayer, Tony Haffer, Grant Simmons, Dave Douglas, Al Breuer, Jim Stogsdill, and Ken Montgomery.

By the fall of 2008, the Robson Ranch Rangers, coached by Paul, were playing in a six-team league at Palm Creek. Because they were not an RV resort, the Rangers needed a special exemption that was championed by Pat Sarty from Palm Creek. The current Robson softball teams still play in the same Palm Creek league, hosting some games here at the Ranch.

The softball club continued to grow under the leadership of Paul who wanted to recognize members who were instrumental in forming the club, creating the by-laws, improving the field, hosting tournaments, and many other important functions. Past presidents include: Dave Waibel, Tom Harris, Keith Uhlenbrack, and current president Bill Schieble.

Paul continues to play league and tournament softball, and with the love and support of wife Judi, hopes to continue for years to come.